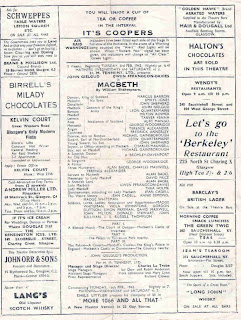 In honour of Scotland's election day, I looked for something related to the country in my ephemera and came up with this 1942 programme for John Gielgud's production of MacBeth for a two week run at the King's Theatre, Glasglow, during the month of February 1942.
The air raid warning notice above, centre, and the advertisement for Kelvin Court flats listing it has air raid shelters certainly provides a context to these performances.
It was Gielgud's 1942 production that saw three actors die and the suicide of a costume designer. The curse was much on the minds of the theatre company to be sure.
At the bottom is the announcement of the production to follow: More 1066 And All That, presented by Emile Littler.
Posted by ralph mackay at 1:13 pm

Your blog keeps getting better and better! Your older articles are not as good as newer ones you have a lot more creativity and originality now keep it up!