D was for Digressive Thoughts Unsubdued 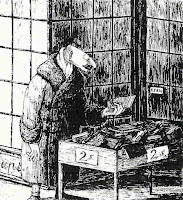 There is a saying in Tilvanica: "Whatever you do, don't discuss physics with mourning doves." Or so I was told. This reminds me of the day when an old friend Tristy Ramshand found himself on the street where Chumley and Pepys Used Books once existed, bricks and mortar that is; I was placing the sandwich sign out one morning, when who strolled by with pipe and avuncular smile but old Trist, and in he walked and proceeded to expound on the nature of coincidence (quoting a writer whose name I have forgotten: "coincidence traced back far enough leads to inevitability") and began to trace the veritable trajectories of his life and how they came to intersect with mine on the sidewalk outside old Chumley and Pepys. He rarely looked at me, fearing no doubt a vacuously rapt expression which might interrupt his thoughts with present reality. (He was rather like having the radio on, except one couldn't turn it off.) Within twenty minutes he had moved on to a discussion of theoretical physics which led him to reminisce about growing up in a small town in Outer Manitoba, called Tilvanica. (For years I have been meaning to see if such a place exists, but his digressions always left me exhausted, and therefore, once he had gone, I was ever reluctant to revisit these memories--does Outer Manitoba even have mourning doves?) Trist was a talking machine capable of holding multiple conversations on diverse topics, a true top lister at any dinner party or get together; and yet, though his digressions had digressions, he somehow managed to round off each conversation with what I like to call a cornerstone remark, which would leave everyone thinking to themselves "hmm, yes. . . .the man is brilliant, but thank god I don't have to live with him and pity the person that does."

Thankfully closing time came round and I went out to get the sandwich board leaving Trist talking to a cornered customer. Upon returning, I interrupted old Trist by giving him a copy of Sterne's Tristram Shandy so the customer could breakaway and make a quiet and quick exit. He said he had numerous copies--though he would like this one--and began to tell me about finding a singular copy translated into Spanish which he found in a book stall in the small town of Upper Sneezewood, and how the name on the flyleaf just happened to be that of a distant, and most eccentric, uncle of his. . . .
But that is another story.
Posted by ralph mackay at 6:41 pm