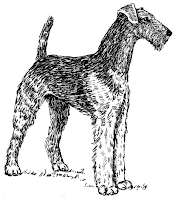 But for the momentary interest in the handsome Airedale terrier looking out from the passenger window of a small white sedan, Jerome's drive home was much like a stylus in a groove, his mind preoccupied with Thérèse, this new mysterious commission, and the invitation to Trieste by P. K. Loveridge. Habit had taken him home. All he could really remember was the face of the Airedale.

Using the electronic garage door opener, he entered the dark cavern that would safely sequester his ageing deux-chevaux for the winter months. Stepping on fog spiced with exhaust fumes, he made his way out, pressing the button to close the door. No mail in the box. It was an odd building. Standing alone, a three story thin building at the back of a property, with access along a leafy back alley. It had initially begun life as a substantial brick car garage, but the present owners had developed it into a modest home, with living quarters on two added upper floors, the top-most of which Jerome used as his art studio, rich in natural light coming from large windows and skylights.

The neighbour's little white dog yapped in their yard as he climbed the exterior stairs to the second floor. His answering machine was blinking its red beacon of hope, but Jerome only found a recorded message for a contest to win a cruise. Up to his studio, he went over to a work table and chose a cassette to play. He truly loved the sound of a cassette tape in its plastic box when handled. And their size, you could flip them over in one hand in a continuous pattern like a meditation device, a pleasing plastic percussion instrument. He was in the mood for Etienne Daho and put his Paris Ailleurs in the stereo, then walked over to the unfinished painting on the easel as the singer broke into Un homme a la mer.

He could paint himself in the bottom right of the painting, kneeling down to pet an Airedale who looked out at the viewer. And Jonathan Landgrave, he could use his face and his long camel hair coat for one of the figures in the distance. That would almost finish the painting. He could do it today, but the need to do a little research on the Bronzino painting disrupted that calmness he required to do his best work. Suddenly feeling fatigued, having slept poorly the night before, he went over to the chaise-lounge and lay down. The sharp edge of the binding of P. K. Loveridge's collection of poetry, Alacrity and Karma on a Yacht off Palmyra, jabbed at his ribs. He withdrew it and opened the volume. Turning the first pages, he came to the dedication page and read:

I know no joy wherein thou hast not part,
My speeding wind, my anchor, and my goal.
-Giordano Bruno.

What an obscure reference he thought. He turned the page and read the first poem entitled Prologue:

While tourists come and go below the antique light,
Above the horse's hoof, aloof the spiders spin
Twin galaxies of thread. They spread with octave might,
A danse macabre, a rondo, lento with each step
The lamp their mystic moon, and soon their school of night.

In morning haze, the maze of silk reveals its prey
Like sailors in the shrouds, or clouds in distant space.
Entanglements of string that linger with the day.
Mute requiems in lace. To trace all time in warp
And weft, has left me on the cobblestones astray.

The street my labyrinth path, my breath an open gate,
With lifeline, headline, heart, I'll start; I'll chalk the slate.

Jerome closed the volume and rested it on his chest. Mélisande. He wondered if she would take old Loveridge back. Perhaps this volume was his attempt to curry her forbearance. Trieste. What was he doing over there anyway? Breathing the second-hand smoke of Svevo, tripping on uneven paving stones like Joyce, or scaring horses with his eyes like Richard Burton?

He closed his, and soon fell into a light sleep.

He could see Thérèse and Mélisande at a table in the crowded night club or restaurant, but he was blocked from getting to them and forced up a spiral staircase by faceless jostlers. Then, finding himself outside at the entrance, he began walking away. A sleek convertible drove by, Loveridge and Landgrave sitting side by side, but they didn't see or notice him. There were people everywhere, as if a street party had broken out. He began to run after the car and soon found himself down by the old port, a tall ship at anchor. He was running towards it along a narrow path and saw another man running towards him. Just before he could recognize the man, he awoke, the book slipping off his chest to the floor, bumping the soft front edges of the volume.

He sat up and rubbed his eyes, wiped his lips and sighed loudly. Mélisande. He could go see her at the Religious Studies library where she worked and talk to her. Maybe she has heard from Thérèse. Then he could go over to the main library to do some Bronzino research.

He changed into more comfortable jeans, and put on his soft desert boots. The walk would do him good he hoped.

“Split Enz.”
“Sorry?” Julie said, smoothing her hair with that most classic of hand gestures, thinking it odd that her boss would be commenting on the state of her hair.
“That song you're humming. It's by the group Split Enz. I haven't heard that one in ages.”
“Oh. I heard it on the radio coming to work. My boyfriend changed the radio station and that song came on. I can't get it out my head. One of those ear-worms.” And then she sang the refrain from Six Months in a Leaky Boat followed by la de da de daaaaaaaa de da de da da de da da.
“My wife says that if you hum the tune of Spider Man you can get rid of any earworm.”
“I don't know that one.”
Duncan realized once again he was old.
“I have to go out to do some errands this morning. I know you can hold the fort. There are no deliveries or pick-ups today, so if you want to lock the front door, and put the sign up for people to ring if they want to enter, please do. I'll be back by one o'clock before you go. By the way, how is your other job going?”
“Good, good. The salon is doing well.”
“Good, good,” he said, feeling like an idiot repeating her words. “Right then, see you later,” and with those parting words he was out in the fog with the 1881 cash book in a laptop bag over his arm. Julie was a smart young women. He was glad he could offer her the four hours each morning from nine to one before her shift at the salon from two to six. She worked hard and her boyfriend was studying engineering so they would be alright in the end he felt. In the end. He sighed as he walked along in the fog in the direction of up town. It would be a bit of a walk, and he wondered if he would have luck in catching a bus. Amelia had the car today so he was au pied.

Mélisande Bramante would be able to help him.  The Religious Studies library where Mélisande worked was such a warm and generally inviting place. Perhaps the quietest library on campus. A favourite spot of his to study when he was at the University.

She was fluent in Latin and would be able to help him with the text he found at the back of the cash book. Missing a title page and other preliminary pages, he hadn't been able to make much of the text, other than to think it touched on religious themes and that it was very old. Had he gone to that private school when he was eight, he might well have studied Latin. He tried not to bring up the fact with Amelia for she had tired of hearing how he had been chosen and had passed the admittance test like his best friend David, but his parents, finding that the yearly fee was $1,000, had to tell him it was something they could not possibly manage. Such a sum in 1966 was insurmountable to them. His parents had only finished high school and higher education and its culture was unknown to them. A stay-at-home Mom raising three sons and a Father struggling to keep a family business running was already a test of their perseverance skills. And how would his other brothers feel if he went to Lower Canada College while they remained in the public system? Guilt. Pride. He could see now it had been a roadblock that had stirred up pride, that most blinding of sins. Frustrated pride had steered many of his movements from that moment on. It was only with many years of looking back, could he see the circuitous path, with all its choices and decisions, punctuated by the 'if onlys' and 'what ifs.'

Seeing a bus waiting at the corner, he ran and managed to just get on before it heaved into the street sending Duncan grasping for a hand-hold. Fumbling for change, he managed to produce the required coinage and find a place to stand near the back. It was as if the bus was in a vapour tunnel. The windows were quite fogged with humidity. He looked down. The woman in front of him was using an Kobo eBook reader. Duncan could see it provided secrecy and anonymity. One could be reading the latest Daniel Steele or the Hohenstaufen Inheritance or whatever those titles of Robert Ludlum books were, and no one would know. And to read with such ease. And to be able to download out of print books printed before 1923, books he had pined for when in his early youth they had been so far from available, was extraordinary to him. Such a wealth of information available to kids these days. He was sure there must be some youngsters out there taking advantage. They should be geniuses by the age of ten. Surely.

The bus came to an abrupt stop sending Duncan swinging round bumping shoulders with a large bearded man who merely glared as Duncan said he was sorry. No wonder people take their cars he thought. He followed the flow, inching toward the back door like automatons, and out into the foggy but welcome open air. He realized he was two blocks short of his destination. Two blocks short of a destination. That was a good one he thought. He should write that one down. 'That guy's two blocks short of a destination, if you know what I mean.' He would have to walk the remainder, but he was fine with that. The walk, he hoped, would do him good.