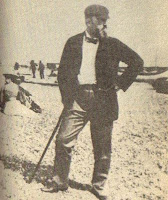 While re-reading a compilation of Ford Madox Ford's various books of memoirs and reminiscences he found himself periodically interrupting his wife's reading in order to share some of the more amusing impressions, stories, and anecdotes with her; as he did so, he began to experience the edge of a vague déjà vu, and he realised, quietly to himself, that when he first read the book, he had fallen into the same pattern of reading aloud the very same passages to his wife, leading him to wonder, quietly to himself, if he had entered his repetitive dotage.

He thought, however, that they both realised, quietly to themselves, that though he may not yet be in his repetitive dotage, they were in fact revisiting a memory whose due date had passed, leaving them, as it were, in its pale shadow, a shadow with out defined edges. Then again, his wife's recall was rather good, so it was quite possible she was cognizant of the repetition, and, being the kind person she was, did not stem the flow of his interruptions for they produced both an echo and an anticipation of the anecdotes and stories which stirred her memory and disrupted her reading of the latest freshest novel of the day, a novel her husband was unlikely to venture near, stuck as she sometimes thought he was, although not wholly, in the past.

He found some of the most amusing stories in the book involved Henry James.  The Master and humour did not generally come to his mind at the same time, certainly not the broad concepts of humour as found in Wodehouse or Rabelais, but there was a wit and an inner laughter that seemed to be living between the lines of Henry James's novels and stories, and as he experienced the portraits of the author as seen through the eyes of le jeune homme modeste, Henry James's fond moniker for Ford Madox Ford (or Hueffer as he was then known), the more he realised that these portraits were rather like archaeological digs into the Man himself. They were vivid and evocative enough to make him want to have been the proverbial fly, and travel back in time, if only for a few moments, just to witness the verbal and behavioural extremes of the Master and his moods, which seemingly could shift on a moment between sardonic wit, mimicry and comic tale telling, to blazing-eyed anger over some insignificant occurrence.


Ford was living in Winchelsea, Sussex, he told his wife, and Henry James was at Lamb House in Rye, a few miles away. His wife knew all about Lamb House and dreamed of visiting the house where one of her favourite authors, Rumer Godden, had also lived. She reminded her husband of her knowledge of Lamb House and Rumer Godden and prefaced her reminder with a playfully emphasized phrase, "Yes Cecil". This two word phrase was a private joke between them, the origins of which found their source in the poet C. Day Lewis. In showing his wife an edition of Modern Love by George Meredith edited by C. Day Lewis which he had bought when he was quite young, he had explained in an aside, that the C. stood for Cecil. She knew this of course, and so whenever he recounted some literary bibs and bobs thinking she would be fresh ears to such facts, she used the phrase, "Yes Cecil". He knew his wife had a wider knowledge and a finer recall than his so he generally anticipated--at least he thought he did--and enjoyed the playful quality of this game.

"Oh, yes, sorry dear, Rumer Godden, that's right. Wouldn't it be lovely to visit? I wonder if it they rent out rooms? Wouldn't it be wonderful to wake up in Lamb House and look out the window upon the garden that Godden and James both gazed upon. It would be a great B&B don't you think?" Although as he mentioned this idea, he did think it rather blasphemous of him. His wife mused aloud that she thought the house was lived in, but was open to the public at certain times of the year. She privately envied the individual or individuals who lived there and wondered how they found themselves in such a position as housekeepers of Lamb House.  What good fortune to be at the axis of a requirement, and a desire. There must be others, she thought, like herself, who had structured a life near their origins, and yet occasionally longed to escape to another way of living in another country.

"It seems," her husband continued, " that there was a novelist named Mrs. W. K. Clifford, who was friends with both Ford Madox Ford and Henry James, and, living in London as she was, she was concerned for the well-being of the older author living in the wilds of Sussex, and asked Ford to look in on him and keep her posted. It seems, however, that Ford wasn't keen." He then read from the book a choice bit of Ford's reflections:

I was in those days of an extreme shyness and the aspect of the Master, bearded as he was then and wearing, as he habitually did in those days, a great ulster and a square felt hat, was not one to dissipate that youthful attribute. I must have been seeing him in the streets of Rye on and off for eighteen months after Mrs. W. K. Clifford had asked me to go and see him.

Her husband's reading-aloud voice was good for prose but she found his voice for reading poetry often as not drifted off into a rather purplish phrasing and accented in an English that reminded her of Alan Bates reading A. E. Houseman, or perhaps Derek Jacobi reading a menu. He continued on with another quote:

For myself, I disliked virtue, particularly when it was pressed between the leaves of a book. I doubt if, at the date, when I was twenty three or -four, I had read anything of his and the admiration that was wildly showered from Bloomsbury in the direction of Rye made me rather stubbornly determined not to so so for some time. I daresay I was not a very agreeable young man. But unbounded admiration quite frequently renders its object disagreeable to outsiders.

That last observation of Ford's was too true he thought. He re-read the previous phrase, "I daresay I was not a very agreeable young man," and thought how it might be used in a humourous way in lieu of describing that group of 1950s authors, the "angry young men," as that group of 'not very agreeable young men,' a phrase more akin to an Oscar Wilde play perhaps, or a remark by a character in a E. F. Benson novel. "Well, Ford gave in finally" he continued, "and was received at Lamb House for dinner." He read further along before chuckling to himself after reading about Henry James's butler. His wife put her book down on her lap, and crossed her arms realising her husband was in this for the long haul. "What did James do now?" she inquired. "Well, it is his butler actually" and he read her the anecdote about the suitably eccentric butler:

His methods of service were startling. He seemed to produce silver entrée dishes from his coat-tails, wave them circularly in the air and arrest them within an inch of your top waist-coat button. At each such presentation James would exclaim with cold distaste: 'I have told you not to do that!' and the butler would retire to stand before the considerable array of plate that decorated the side-board.

Laughter coming from a bedroom at 12: 30 in the morning could be interpreted as odd, but their window was closed and their elderly neighbors, they believed, long retired.

He related to his wife the fact that Ford found himself to be the trusted autumn, winter and spring friend with whom James could consult and converse. Summers for Henry James were devoted to visitors of a more distinguished background. Their friendship included many excursions between Winchelsea and Rye on foot when such means of transportation still retained a pastoral perambulating quality. Her husband resumed his reading aloud from the book:

But, as soon as the leaves fell, there he was back on my door-step, asking innumerable advices--as to his investments, as to what would cure the parasites of a dog, as to brands of cigars, as to where to procure cordwood, as to the effects of the Corn Laws on the landed gentry of England . . . And I would accompany him, after he had had a cup of tea, back to his Ancient Town; and next day I would go over and drink a cup of tea with him and wait whilst he finished dictating one of his sentences to his amanuensis and then he would walk back with me to Winchelsea. . . . In that way we each got a four-mile walk a day. . . .

The husband stopped reading and stared at the wall facing the end of the bed where a print of a veduta of Florence failed to capture his attention. "Is that it for James?" she inquired. "I just had the oddest thought," he said, "I could live in Winchelsea, and you could live in Rye, preferably Lamb House, and we could be writers and visit each other like James and Ford. Wouldn't that be interesting? Certainly it would keep us fit walking between the towns." It was certainly a strange concept she thought but she didn't go there. "Somehow I don't think the road, and its traffic, will be as pastoral as it was over a hundred years ago" she ventured, though she liked the romantic dream quality of the suggestion. "If we were rich, of course." He was silently contemplating the possibilities. "Well, we could just try it for a holiday, check out the lay of the land. See if the locals are friendly, the sheep aggressive and all that." They both returned to their books in silence, the fanciful notion settling in their minds like the sheets upon their bed.