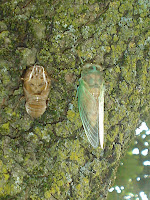 In casual conversation with a neighbor on the sidewalk before my house, he noticed--keen sighted for a man in his early 70s--an insect on the tree trunk behind me on my lawn. I turned to investigate and discovered a cicada newly emerged from its simulacrum, drying its new-born wings beside the phantom of its old body which had crawled out of the ground after perhaps six years as a grub and nymph. It had crawled up the trunk about seven feet from the base and attached itself there facing the street.  An odd and rather vulnerable place. It was a rare chance, I thought, to see a cicada beside its cast off shell, and I am grateful to my neighbor's sharp sight. Our conversation continued apace, some of it dealing with cicadas, all the while I was thinking I should try and take a picture. We parted and I did manage to take a few photographs. My camera, an old, inexpensive digital model, was not adequate for the job, but enough to capture the moment.  A few minutes after taking the pictures, the cicada disappeared.  Now when I listen to the cicada in the trees, I think it might be this very one, together with the other harbingers of heat in their short life of a few weeks.

I wrote two haiku inspired by this sight:

I have long had an interest in Japanese literature and culture even before discovering Lafcadio Hearn in the late 1970s. In his Shadowings, he devotes a chapter to Sémi, the Japanese cicada.


Anyone wanting to learn more about the unusual lives of Cicada, Agriculture and Agri-Food Canada has an excellent site devoted to this fascinating insect.