Words, and Numbers, and Rhyme 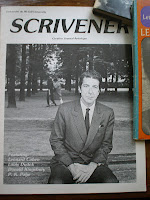 Rain was seeping mist, my tea was cold,
A pinching darkness lay upon the room.
Feeling less than able, feeling, old.
Dieffenbachia and Spathiphyllum gloom.

Then, appeared the poet. Not in a dream
Distant, yet so near, asking for a light,
But on the cover of a McGill magazine,
Dapper, poised, looking at the camera's sight.

How he came to be within “Utilities”
I don't know. But out he slipped fresh as print.
Nineteen eighty-two, “Scrivener” volume three,
Slightly yellowed, nick or two, not quite mint.

Purchased at The Word, the source, the stream,
Captured by the poet's poker face.
Chosen over Pynchon, or a Henry Green,
Two bucks proffered for a soul of grace.

Twenty-four in nineteen eighty-two,
Blind, adrift, still plodding in the maze,
(Rereading books like Soren's 'Point of View.')
Did I see a way within his Zen-like gaze?

Ladies' man at forty-seven, lover,
Troubadour poet, and singer of fame.
Thirty years have not quite seen another
Suit and cowboy boot on la rue Saint-Urbain.

Forty-four years I lived in the city,
Happenstance never once crossed our ways,
Sharing a bench, and views of women so pretty,
Feeding dry bread to the birds and the strays.

Would it be too late if this native returned
Recognitions faltering dense with time,
New steps, old paths to movements long adjourned,
Papers in pockets, words, and numbers, and rhyme? 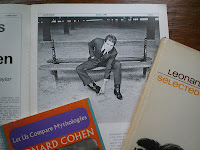