In for a Penny, In for a Powell 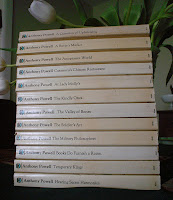 I know very little about Anthony Powell.  Although, I do believe he was rather tall and possibly forbidding.  Well, I guess I am being disingenuous for I do know a bit more about him than that.  I know he was fond of figs.  No, I am just making that up.  From his pictures he doesn't look like a fig fancier.  More a Banbury cake fancier I think. Although he may not have wanted anyone to know of his predilection for pastry.

I am sorry, I must be in a whimsical mood, or perhaps merely hungry, or both. I am sure I know what anyone can know about Anthony Powell by looking up his information on wikipedia, reading an obituary or two, a few critical works and essays.  Or best of all, perhaps, by reading his Memoirs (4 vols.), his Journals (3 vols.) and his Novels (20 vols.) and miscellaneous plays and essays. I am not, however, a Powellite or whatever the followers and devotees of the man and his work call themselves, but I have read a few of his novels.

Faced with the stack of Anthony Powell's  Dance to the Music of Time does seem a rather forbidding reading task (although, perhaps not as forbidding as the seemingly forgotten ten volumes of Romain Rolland's Jean-Christophe.)  All that clever wit and subtle satire in volume after volume after volume. To be a reader in 1951, and pick up the first novel in the sequence, A Question of Upbringing, would be the easier task. To read one Anthony Powell book every odd year or so, and enjoy the anticipation and uncertainty of when the next one would arrive in the bookshops, would be the ideal reading pattern.  I imagine even the author himself would find the complete sequence to be a daunting challenge to read all at one go. To see and hear through the eyes of Nicholas Jenkins for so many pages would likely drive one to read a Ross Macdonald hard-boiled mystery, an Alice Munro short story collection or a Samuel Beckett novel (in French) for a change of style and subject matter. Reading one a month would be more feasible. Such a schedule would likely save one's sanity and would limit the influence of his style--enjoyable though it is--from seeping too deeply into one's conversation and letter writing.

The different cover art for his novels over the years can be a source of interest. The original illustrator for his twelve volume sequence published by William Heinemann was James Broom-Lynne, who was certainly a talented and prolific (a word that is beginning to loose its power, shall we say, fecund, creative, cornucopian, yes cornucopian seems apt for his dustjackets, illustrations, novels and plays) artist and writer.  His covers are heraldic in design with the use of a rather dour grey punctuated by various bright colours with the details hinting at, in a general way, the content. The size of the books, crown octavo, small by today's standards, make them easy to read and the original red cloth bindings and gilt titles make them handsome enough books. It is an achievement in design continuity since the first book was published in 1951, and the last in the series, in 1975.  Broom-Lynne also designed the four volume set by Heinemann using the lower portion of the painting by Poussin and overlaying vertical colour strips, a design which was then modified by the American edition published by Little, Brown and Co., and more recently by the University of Chicago Press.

The Penguin Books paperback editions which came out in the 1960s sported cover art by Osbert Lancaster and they were a mix of finely detailed exterior architecture, like Casanova's Chinese Restaurant, and finely detailed interiors, such as A Question of Upbringing. Some of the covers featured interiors or exteriors with groups of people but without a defining representation of any one character. There is a lightness that reflects Lancaster's style and to a certain extent, the satire and situations within the novels.

Berkley Books issued a series of paperbacks with odd covers which were still-lifes with objects that reflected the content, including a small pocket watch being one object that appeared in each design.

Fontana Books first issued a series in the late 1960s with rather stilted paintings of characters from the novel.  The effect is weak.  They followed this up in the early 1970s with richly defined photographs of still-lifes reflecting the subject matter within.  Then in the late 1970s they brought out a new series with cover art by Mark Boxer.  These depicted characters from the novels in a more idiosyncratic manner, being essentially caricatures. Boxer's black ink sketches with a colour wash to various details are certainly interesting, and although they represent specific characters in the books, they don't subvert the reader's own imagination of what the characters may look like.  The caricatures evoke character rather than define their appearance. (Although I have to admit that the caricature for Temporary Kings makes me think of Martin Amis in his mod, long-hair years--the image on the back of his novel The Rachel Papers for instance. Martin Amis was friends with Boxer and their lifestyles did have a certain resonance with the books. It is just that the caricature on this book is of a woman, Pamela Widmerpool. My perception only I am sure.) 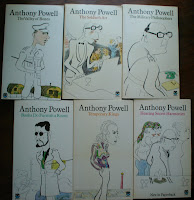 The paperback covers, in tending to represent the time of the novels, also reflect their own time in their style of illustration or design. If someone were to redesign the covers for the 21st Century, I wonder what they would come up with.  There is a modern tendency to have the art work span all the spines in a multi-volume work to create one visual image. That could be one possibility. Using the painting by Poussin seems too easy. Something fresh would be needed.  I wonder what.