Rescued For The Few: Francis Sherman on Parting 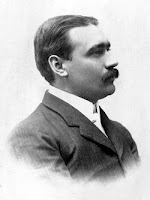 I am not at all knowledgeable concerning chapbooks issued by, or for, Canadian poets, but coming across the works of Francis Sherman (1871-1926), I have to wonder if his Two Songs at Parting issued in Fredericton, New Brunswick in the winter of 1899, and consisting of two poems, one by Sherman and the other by his good friend John Bodkin--poems facing each other, recto/verso with the sewing between--might possibly be considered the smallest or briefest of chapbooks ever issued by a recognized, though lesser-known Canadian poet.

Having recently posted a poem by L. A. MacKay who was rather critical of certain established older poets such as Bliss Carman, I thought it might be an interesting balance to post this poem by Francis Sherman that also touches on the month of April, and whose friends included Bliss Carman and Charles G. D. Roberts. In fact it was Carman's Boston publisher, Copeland and Day, who issued Francis Sherman's first volume of poetry in 1896 entitled Matins. It consisted of 30 poems on 58 pages, and was bound in boards. The edition consisted of 500 copies, plus 35 additional copies on English hand-made paper and printed on the Rockwell and Churchill Press, Boston, in November of 1896.
This was followed up by the poet's second book, a chapbook in wrappers of 11 pages entitled In Memorabilia Mortis, and was printed by John Wilson and Son of the University Press of Cambridge, Massachusetts, in December of 1896, and consisted of 6 sonnets with decorative initial capitals and a decorative first page à la William Morris, the poet's great influence.
Another chapbook, A Prelude was privately printed for him and Herbert Copeland and F. H. Day and their friends at Christmas 1897 and consisted of 10 pages.
His fourth, another chapbook in wrappers, was The Deserted City: Stray Sonnets written by F. S. and rescued for the few who love them by H. D., privately printed by F. H. Day in 1899, and consisted of 19 poems on 12 pages.
His fifth I already mentioned as possibly being the briefest chapbook, Two Songs at Parting, and his sixth and final issue to the best of my knowledge was A Canadian Calendar: XII Lyrics privately printed for him at Christmas in Havana, Cuba in 1899. and dedicated to his friend F. H. Day. Unpaginated, it runs around 15 pages.
His poetry reflects its period through the choice of words and treatment, but this short poem on parting that references the month of April seems at least presentable to modern eyes.

And after many days (for I shall keep
These old things long forgotten, nevertheless!)
My lids at last, feeling thy faint caress,
Shall open, April, to the wooded sweep
Of Northern hills; and my slow blood shall leap
And surge, for joy and very wantoness--
Like Northern waters when thy feet possess
The valleys, and the green year wakes from sleep.

That morn the drowsy South, as we go forth
(Unseen thine hand in mine; I, seen of all)
Will marvel that I seek the outmost quay,--
The while, grey leagues away, a new-born North
Harkens with wonder to thy rapturous call
For some old lover down across the sea.

For a good overview of the author's life, a memoir by Lorne Pierce who edited the collected poems of Francis Sherman issued by the Ryerson Press in 1935, can be found here.