Love and Summer by William Trevor 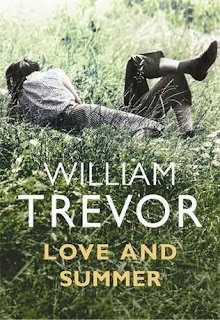 A Reader's Preamble
Unknowingly, memories began to stir when the new book arrived. As his hands felt the shape and texture of the dustjacketed hardcover, his eyes were absorbing information from the cover image and the four blurbs on the back. Gazing at the author's photograph taken by Lord Snowdon, the idea of senescence was roused, those aged creases and wrinkles holding shadows of experience. After having read the front flap with its succinct storyline overview, the memories began to surface, his mind initiating a recall of sensory data, emotional responses, textual and visual memories. 'When was it that I first came across the author?' 'Where was that sale?' An image of his hand holding a penguin paperback of The Old Boys, kneeling he was, a box of books under a table, a church sale, 1981, or 1982. He saw a younger self sitting back in a comfy chair, legs up, reading the penguin copy. Then, a fleeting image of himself reading the paperback on the Metro, hunched in dim light. Opening this new book, he scanned down the impressive list of titles by the author. Where was his copy of The Love Department he wondered? Oh, yes, Mrs. Eckdorf in O'Neill's Hotel, two copies he had, somewhere. The American and the British editions. What an odd place to have found that second copy he thought, remembering the fly-by-night remaindered shop that appeared around the holiday season one year. He really must find those books, it would be interesting to revisit them. However, a sigh of frustration waffled out of him as he realised how much effort, energy and time, priceless time, would be required to search through shelves and boxes. His eyes turned to the title page, Love and Summer by William Trevor. Best to rest lightly on those memories of past reads, he mused, and he turned to the first page and began to read.

Halfway through the novel he found himself searching for a piece of music. It was only after having listened to the music did it occur to him that his post-prandial rummaging amongst older cds was unconsciously driven. He didn't know the meaning of the words, for the rich voice of Heather Rankin was singing in Gaelic, a song entitled Walk With Me, but it didn't seem to matter. He felt the tone of the music fit the mood of the novel he was half-way through. How and why his inner mind could reach back to a cd he had been passing over not only for months, but for years, left him feeling greater respect for such inner processes, and wondering if his conscious mind was but a feeble and poor assistant.
After having finished the novel, he placed it aside. He was a slow reader. Returning to the novel after a few days of unconscious gestation, his musings began to flow with the alacrity of honey. He began to make notes on the characters, the setting, the situation. What could he possibly say that had not already been said? He had yet to read another review for he tended to avoid them until he had set his thoughts on paper. His responses were not always robust, but at least they were his own. In the curiosity of discovering insights and nuances he had missed, providing colour and shadow to his understanding--or at least, a not unwarranted respect for another's style or turn of phrase--he would finally seek out professional reviews.
Love and Summer 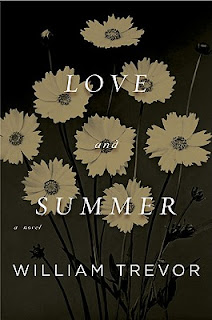 Although firmly set in rural Ireland of the late 1950s, he found such a shared human story that he could easily imagine it to be set in rural Japan, Canada, Botswana or any other country on the planet. A sad, poignant tale told with clear yet subtle poetic lines that possess a rich silence between the words.
The story opens in the month of June. It begins with a leave taking and is rounded off with one as well. Florian Kilderry, a young man from a neighbouring house in the country, bicycles into the nearby town of Rathmoye to take photographs of architectural decay, his new found passion. Unfortunately, it is the day of a funeral for Eileen Connulty, the once domineering matriarch of the Connultys of Rathmoye, owners of the coal works, the cinema, and a well-respected boarding house establishment. She was predeceased by her husband who died in the fire that consumed their cinema, The Coliseum, the remnant of which Florian Kilderry finds ideal for his photographic desires.
We are introduced to the small cast of characters, all seemingly marred by the circumstances of life, single or alone in their relationships with others, the memories of the past, and the irredeemable present. There is the daughter, Miss Connulty, unloved by her mother, betrayed when young by a man who was a "traveller in veterinary requisites" and now a dour older woman, and new mistress of the boarding house. Her brother, a twin, Joseph Paul Connulty, is unmarried, a sober, honest member of the "Pioneer Movement" and the operator of the coal works. His early hope of a religious vocation "lost beneath the weight of his mother's doubt." The twins are adult children locked into inherited roles, trapped by the vestiges of the their parentage. There is the farmer, Dillahan, burdened with the guilt of having accidentally killed his wife and child in a farming mishap, a man gripped by the past and yet forced by the demands of tending to land and animal, to live in the present. There is Ellie, an orphan, brought up by nuns and now married to Dillahan, a younger sensitive woman who manages to live with a man who treats her well, but, whose grief has withered his passions. Their is Florian Kilderry, the young carefree spirit, a late child--possibly a mistake--of older parents who were both artists, his mother coming from a well-to-do Italian family, and his father from a penniless Irish background. There is Bernadette O'Keefe, the secretary for Joseph Paul at the coal works, a woman of a certain age with an eye for her boss, but one that is unrequited. And finally, the cast is rounded off by the Protestant librarian, Orpen Wren, wandering about the town and country, confusing figures of the present with those of the past, his mind reliving the experiences of his youthful prime. He was once the librarian to the St. John of Lisquin family and lived at the big house cataloging their library and personal papers. The house is long gone, now but an outcrop of stone amongst weeds and overgrowth.
The figures of Florian and Orpen are rather symbolic of the future and the past. Florian cycles into the town of Rathmoye, a symbol of positive movement and creative imagination. His parents have recently died, the inherited homestead is in decay and up for sale and he dreams of immigrating, possibly to Scandinavia. He discards his past, his laissez-faire upbringing, his parent's artistic heritage. What household furniture and belongings that are not sold or given away, he burns. He even burns his early attempts at writing fiction. He has spent his remnant summer preparing his departure, reading F. Scott Fitzgerald and exploring the world of photography having found an old Leica camera amongst his father's belongings. Orpen Wren is the opposite, a relic, emblematic of the past no one wants to remember, an old man whose thoughts have found comfort in the retreat and attachment to memories, memories reenacted in the present. He confuses Florian for a member of the St. John family and insists he take the family papers that Orpen carries with him.
This dance of the past and future is accompanied with the dance of present love between Florian and Ellie. Ellie first saw him while she was in town on the day of Mrs. Connulty's funeral. Ellie is a gentle creature who delivers eggs to the Connulty family for their boarding house, an overt yet natural symbol of birth and the feminine. She has a habit of using double negatives in her speech such as "you'd never not want to go," phrases which anchor her to the countryside and yet also seem to point to the psychological weight of her upbringing in the foundling hospital, raised by nuns. Their gentle love is one of bicycles, country lanes and lavender meadows, and glimpses of the past like the long shadows of trees in the rays of a setting sun. Their dance of emotion and memory is very poignant and moving and brings us full circle to another leave taking as the dog days of summer dwindle to the cooler September and their love of a summer becomes a memory in this beautifully told novel.
Posted by ralph mackay at 5:21 pm