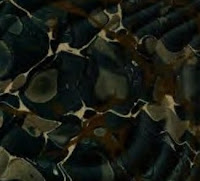 Adjusting her ear buds, Mélisande Bramante started her iPod and settled back on her favourite bench under the overarching branches of an old fruit tree, the bruised shadows of the summer having diminished to mere latticework in the declining light of autumn. One of her stable of University squirrels made its way over to her. She reached into her lunch and drew out a small brown bag of peanuts, in the shell, and tossed one lightly towards it and watched its dexterous little fingers handle the nut and its little teeth nibble away at the protective shell—one of her simple pleasures. Their world didn't offer much room for diversification of character—their goals in life were fairly circumscribed, though their skills at dissembling and hiding food gave them scope for creativity—but she could discern subtle differences in their demeanour. She had given three of them names, March Hare, Mad Hatter, and Dormouse. It was the latter who was before her nibbling on the brittle shell.

As she bit into her hummus, tomato and pickle sandwich, the block piano chords of one of her favourite songs played in her ears, Ashley Chambliss’s A Little More of You. She closed her eyes with the pleasure of the song and the anticipation of the artist's next song, Iron Hands, which was to follow. Listening, she realised, perhaps for the first time, that the right hand chord remained constant, while the left hand went up and down a few notes on the scale, slowly like footsteps up a flight of stairs, and then down; the base notes made her think of Sisyphus and his stone, and the right hand, timelessness, infinity. Her visualisation of stairs, a miniature Escher-like interior that was at once an exterior, roused an old memory of a recurring nightmare she had had as a child; she would be climbing a staircase, a staircase without supporting walls, and upon reaching a narrow landing, she would drop to her knees clutching the edges of the structure, vertigo within her, nothingness without. She discovered later that she would descend the stairs from her bedroom, still asleep, and find her Mother in the living room and curl up beside her on the chesterfield. And her Mother would lead her back to bed. After months of this behaviour of sleepwalking, her Mother had told her about her nightly visits. Mélisande, even at the age of seven, had been embarrassed. She had revealed the nightmare. A pill was prescribed by the family doctor. The nightmares ceased.

She often used to wonder if her Mother missed her somnambulant visits.

She opened her eyes and breathed deeply. It had been an odd morning what with the fog finally dissipating and that shelf collapsing. Thankfully the swoon-worthy hunk who had caused it had helped her put everything back. Such nice hands she thought.

She finished the triangle of sandwich and wiped her lips and hands before taking out of her purse a half read paperback copy of Sarah Caudwell's The Sibyl in Her Grave, and within it, like a bookmark, a small envelope addressed to her from her friend Sophie, a reference librarian at the McLennan Library. She wondered if it was an invitation to a bibliographic bash or possibly a send-off for a septuagenarian librarian named Marion. Sophie was always organising some get together or other. She could see the windows of the library from her bench and wondered why Sophie hadn't just dropped it off by hand. Opening it she found a card with an image of a young woman flying on a magic carpet made of an open book, and within, a hand written note and a piece of paper, folded and taped shut. She read Sophie's message in the card:

I know this is odd, but I thought this would be the best way to handle it.

I recently had a request to find the obituary of an old McGill English professor, a Professor Petherway, and I came across the unusual name of Loveridge in the same obits. Since it's an unusual name, I thought it must have had a connection to Pavor. I want to give you the information but I also want to give you the opportunity to refuse it, or give it to Pavor and then proceed from there. I know this must sound strange, but I know how much you love him and how long you've been waiting for him to commit.

All my love,
Sophie

P.S. If you read the information, let me take you to lunch.

Mélisande held the folded paper in her lap while her imagination conjured up episodic possibilities similar to the Wilkie Collins novel she had been reading. Was she going to read about the death of Pavor Loveridge? Was she in love with someone who took over his life? An impostor? A twin? A fake Pavor?

With her thumb nail, she cut the tape holding the folded paper together. She hesitated while she listened to the sound of leaves scuttling along the sidewalk nearby, like the sound of rats beneath her in the depths of the city's subterranean world. Rats. Where had she read the story of about a usurper of an 11th century archpiscopal seat who, having refused food to the starving poor during a famine, had fallen sick in his island castle on the Rhine only to be eaten by rats? A cautionary tale. Karma. Alacrity and Karma on a Yacht off Palmyra. She would have to read more of Pavor's book. Pavor. She held the photocopy paper in her hands and slowly unfolded it.

She had waited long enough.

It was an old obituary from the Montreal Gazette. The death of Victoria Loveridge and her daughter Tamara, beloved wife and daughter of Pavor Kristof Loveridge . . . . the remaining words were mere marks on a page, hieroglyphics. Her hands shook, the envelope fell to the grass.

The Dormouse, awaiting another peanut, scampered close to investigate. Picking up the envelope, he sniffed it, turned it round in his hands, and then let it drop. He looked up, confused, uncertain, unsure.

She didn't need to read more.

She looked down to see the Dormouse sniffing the ground. She picked up the bag of peanuts and emptied them unto the grass, an overwhelming bounty for the poor thing, like a pile of prehistoric bones for an unwitting archaeologist. The mother lode. Winter was around the corner. She never knew if her favourite squirrels would make it through to Spring. Dormouse would have a better chance of it now.

Back at her desk, she withdrew an old-fashioned buff card catalogue from her supply of now obsolete card stock, and placed it in her typewriter and began to catalogue Pavor's book of poetry. The card would be filed in a special drawer devoted to Pavor's work. The other thirty-five drawers of the oak filing cabinet she had at home were devoted to all the books she had read, catalogued by author, with the date of completion and occasional comments and page numbers annotated in pencil on the back. Life is long, but catalogue cards are thin. She didn't worry about running out of filing space. Thirty-six drawers, she thought, were sufficient for the most edacious of readers.

She slipped the finished card inside the book and put it back in her purse. She was doubtful she could read the book just now. Perhaps ever.

After breakfast, Declan and Harry had left Jerome to his own devices, and he'd planned to further explore the maze but his shoes had been taken, ostensibly to be dried. He'd returned to his room, used the facilities, maundered over Rossetti, avoided the journal, and looked out the window until boredom had led him downstairs to browse the library to pass the time until Thaddeus would find him and escort him to Lucrezia for another sitting.

As he neared the open door to the library, he glimpsed Lucrezia coming out of a room. At first he thought it was Declan's office, but he realised it was in the adjacent corner. She closed the door and pushed a book back with her foot, a book in the middle on the bottom shelf, and then left by the door to the drawing room. He stood still as if struck with catalepsy. At once he thought he should go in search of his shoes and forget what he had just seen, but no sooner had the thought passed his mind, than he found himself in the library approaching what he believed to be another sham door. But it was genuine. The shelf section contained real books, not just the facade of spines. Bound sets of French and Italian classics. Some German authors as well. He bent down and pulled out the middle book, a three-quarter bound volume with gilt lettering on red, entitled The Dark Room – Strand. He wondered if it was an old novel from the Strand Magazine, but whatever it was or had been, it was now a sham book, for there was a click and the shelf section sprang open to reveal a groove on the side to pull it further. The weight of the door must have been exceedingly heavy, but it easily glided open and pocket ceiling lights came on. He hesitated. It was another room of very old books, perhaps ten feet by ten feet. An intoxicating odour of ageing leather, paper and ink enveloped him as he slipped in sideways. An oak pedestal in the middle of the small room was the only furnishing other that the rich diversity of leather bound volumes. On a shelf under the pedestal he noticed a slim volume with 'Catalogue' in gilt letters on the spine. He lifted it up to the inclined reading platform and opened it up to the title page.

The Dark Room
A Catalogue of Esoterica
From the Collection of D. G. K., a Gentleman.
by
Duncan Strand
Montreal: Grange Stuart Books
1988

He looked around at the gilt titles shimmering in the low light. A thick dark leather volume entitled Disquisitionum Magicarum with the date 1657 at the bottom of the spine caught his eye. Books by Freytag, 1710, Thyrseus, 1600, Pererius, 1598. Other names from the shadows between the raised bands, Roger Bacon, Paracelsus, Basil Valentine, Agrippa, Francis Barrett, Pseudo-Hermes, Helvetius, Lull, Dee, Bruno, Fludd, Maier, Vaughan, Flamel, van Helmont, Sendivogius, von Mynsicht. They must be books from the old Castlebourne estate he thought. Nothing unusual. People collected all sorts of odd books. A floorboard creaked, or so he thought. Careful not to make a noise, he slowly turned around and was startled by a dark oval of polished stone held in place by a filigree of ironwork on the back of the door, and upon it, his reflection, his dark semblance, like an aura, or the shadow of guilt.

After waiting moments that seemed endless, he took a deep breath and braved the opening. No one was there. He closed the door and pushed the book back in place and was sitting on a couch with the first volume of Godwin's Caleb Williams when Thaddeus found him.