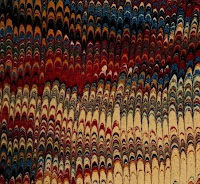 Looking back at the sequestered bench on the narrow street overlooking the city below—a space of quiet stillness sheltered between colourful houses—she felt a version of herself had been sitting there for generations, a version of herself asleep like Rip van Winkle. The windows looking down upon her, welcome eyes filled with concern and sympathy. Rip van Winkle? Jerome van Starke?

The cold rain had ceased as abruptly as it had started. The remnant clouds scudding slowly towards the mountain reminded her of recognisable appendages, the caboose, the dinghy behind the yacht, the tail of a kite, the sweepers after a parade, the last car in a funeral procession—invariably an older model, striking in colour, windows down, smoke trailing, in need of a wash.

She took a few steps feeling as slow as a tortoise, and dizzy as the ripples in the large puddle she had stepped in. Looking down, she captured a vague recollection as the blue sky hovered above her dark reflection. Her image wavered at once below and above her, bringing to mind a snow globe her Mother had given her depicting a child looking up at a Christmas tree and a snow covered house, a snow globe now residing on her Mother's mantle piece beside a clear wedge of acrylic, an award from a Press Club, an award she had passed on to her Mother for bragging rights, an award metaphorically transparent before the mantle mirror. Snow globe? Press Club award? Her Mother?

A veiled recognition swept round her like a warm caftan. Profession, identity, name, location, however, were still beyond her like the sums of difficult equations. Press Club? A journalist?

The street names on the sides of houses, Dragefjellsbakken. Sydneskleiven, oddly stirred up startling memories of Winter Olympics in northern Europe, down-hill skiers skidding and slipping at tremendous speeds, waves of snow spray in vast arcs towards the spectators.

She stood on the cobblestones before an old wooden house, its blue and white colours making her think of Wedgwood china. It was as if she had shrunken and was now walking around the streets of a toy village, the tawny roof tiles predominating over the muted oranges, blues, yellows, greens and brilliant whites. She advanced towards a smaller house. The address number was 13. Unlucky number she thought, but the house appeared to be so pleasant and inviting. The clapboard houses had such cheerful pastel pigments. Smart as paint, her Father used to say. Her Father? Paint, painter, Jerome . . paintings with her face . . . powdered pigments, glair, egg tempera, linseed and lavender oil, fresh free-range country eggs, gesso, cinnabar.

Behind her, a large puddle captured a limpid reflection of the blue sky, the colourful houses, a late season climbing rose bush, assorted empty clay pots and her own figure in the scene.

An older couple coming towards her, an inquisitive terrier leading them on, noticed that the nicely dressed young woman's movements were eccentric, her hair wet and mussed. Their first thought was drugs, but on approaching closer they sensed something more disturbing. A psychological disorder perhaps. They nodded a greeting as their dog strove to sniff her pant legs.

“Hello,” she said., talking to the dog, “such a . . . beautiful—.” She bent down and petted the dog while the couple exchanged glances.

“Are you needing help?” the older woman asked with a heavy Norwegian accent. Her husband stiffened his shoulders as the words passed her lips.

“I . . . I seem to be lost,” she said looking up at them from her kneeling position with a timid smile while the dog licked her hands.

The couple exchanged words she didn't understand, and then the women withdrew a cell phone and dialled a short number. The husband looked up, seemingly interested in roof tiles.

Pavor Loveridge, his legs almost weightless with fatigue, eyed an available chair and table at the small hospital café, then leisurely made his way over with his coffee and panini of roasted egg plant, cheese and pickle.

Readiness is all, someone had said. That was either Gloria Child or Hamlet he thought. The lines came back to him as he lay his cup and plate down, sweeping aside remnant crumbs. 'If it be now, 'tis not to come. If it be not to come, it will be now. If it be not now, yet it will come—the readiness is all.' His Father, known for his occasional thespian moments, favoured those lines. How many occasions had he attentively listened while his Father, the lawyer, the QC, had declaimed those singular syllabic words? How many occasions had he waited for the dramatic emphasis of that trisyllabic barb? There was often a gin and tonic involved. A memory, impressionistic and vague, stirred within him: the nineteenth hole—the eighteenth green a malachite kidney spread out before them—clinking glasses of shandy, toasting a fine round of golf, the savour of a win over the upstart son following in his footsteps. The readiness is all. Ready for that gust of wind. Ready for the moment of calm on the green. Readiness for that fox in the shrubbery. Readiness. Waiting. Waiting for a verdict. Waiting for a decision. Waiting for . . . news about Tullio.

When he had arrived at the hospital, the overworked staff had informed him that they were waiting for family to arrive, and therefore were unable to provide him with information, him being an outsider, him being a stranger, a stranger with a most tenuous connection, a connection of words on numbered pages, fictions, imaginings, paper and ink. A nurse, of Vietnamese heritage, in her blue outfit and running shoes had suggested he have a meal and come back in an hour or so. Smiling with tired eyes, she had provided him with directions to the café. Running shoes. Nurses were always on their feet. How many kilometres they must walk in a day he had wondered.

The sandwich now but crumbs on a plate, he slowly stirred a spoon in his coffee as the conversations with Carina and Umberto revolved in his thoughts.

“I just talked to a homeless young woman with a black cat named Dante who seems to be using one of the old drainage conduits in the fortification wall as a refuge.”

“Oh, Carina. Yes, yes, she works with the youth centre here. She is not without a home. Not now at least. Occasionally she revisits the fortification and the fountain. We all need to revisit sometime no?To be alone. She walks Dante on a leash and has a small apartment not far from mine. Carina, yes, an interesting case. Smart, but . . . circumstances.”

Pavor could almost hear Umberto's nuanced speech as he sipped his coffee. The homeless are truly alone he had said. The rest of us, even though we may try to stand out as individuals, or distance ourselves from our roots, we are always seen as part of a group, like his own for instance, white, male, Catholic, Italian, Triestine, photographer, senior citizen, tribal units that define and confine us. But the homeless, he had said, gesturing with his hands out before him as if seeking alms, are truly alone. We see through them. It matters not who or what they are, we see through them.

He had asked Pavor to list his 'photogenics' he called them: white, male, Protestant, Canadian, Montréalais, lawyer, author, and they had sat there on the bench, their 'photogenics' before them like cards on a table.

As his fellow café patrons surrounded him with their 'photogenics,' he recalled the visit to his Mother in Prague, Umberto's old-world ways having stirred her up. They would get along, he thought. He could see them strolling together on the path besides the gardens of the Prague Castle, as they had, discussing this and that,  the weather, health, neighbours, the Euro. It had been an unusually cool August day, and their stroll had been effortless, additional discussions of the past perhaps less so—Montreal, her ex-husband Mr. Loveridge, Pavor leaving law for authorship, the reasons left unsaid. (Life had shuffled the deck.) The discussions of the future—marriage with Mélisande, “such a nice girl, why she needs iconography on her arms, is there not enough all around us; but, a wedding dress with long sleeves would do.” The unvoiced resignation at not having grandchildren. They had stood at a viewing area, the old city roofs below them, orange tawny like autumn colours. She was happy she had said. She had a few good friends and neighbours, her health was robust, and she felt at home. Among her tribe Pavor now thought.

And yet, she kept the surname Loveridge. It stood out among the other name labels in the foyer of her apartment house, exotic, a curiosity. When he had arrived at the corner of her street, Lesnicka, he had stood gazing up at the Art Nouveau winged female holding up the corner tower, and she, fixed in stone, gazed down upon him as she had upon countless others through the years, unwavering, resolute. He had never photographed her for she was timeless. Certainly unchanged since he had last visited. Other things had changed somewhat. More construction of office space. More renovation of older buildings. More graffiti. More people preoccupied with cell-phones and other devices. More tourists.

He had felt like a local as he recalled lining up to take the funicular from Ujezd street to the top of Petrin Hill on one of his days alone exploring the city for possible fictional locales. The goal was the Petrin tower and the mirror maze. He could see his character Rex Packard trying to locate the real villain in the mirror maze or climbing up the 299 stairs of the Petrin tower—a small scale replica of the Eiffel tower—in pursuit of said villain, only to look out from the windows at the top to see his culprit waving up to him as he sauntered towards the Baroque Cathedral of St. Lawrence just below.

As the dregs of his coffee cooled before him, he remembered he had put the slim volume of Sir Richard Burton's book in his inner jacket pocket. Bored, he withdrew it and began to read at random, the eye attracted to certain words.

Truth is the shattered mirror strewn in myriad bits
While each believes his little bit the whole to own.

Pavor looked up to see the young nurse who had directed him there. He smiled and asked her if there was any news.

A coma. Pavor sighed a relief. He thanked her profusely for being so kind as to let him know.

She told him Tullio's family was with him and that he could always check back tomorrow for more news. There was no point in waiting.

He thanked her again before she left, and then looked down at the book he was reading, flipping pages to read another passage:

The Gothic Moon, the lesser light,
The lover's lamp, the Swan's delight
A ruined world, a globe burnt out,
A corpse upon the road of night.