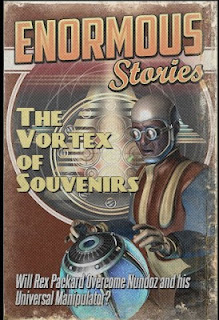 Feeling lonely and slightly hungry, Pavor Loveridge stretched out on the settee, a print out of his day's writing on his lap, his foot tapping to the beat of Corcovado from the classic Getz/Gilberto album. It was 11 p.m. and his eyes were dry and his will was weak from a long day of writing and tossing baskets with paper rejects. Stucco ceiling. Who does stucco ceilings anymore he wondered. It was almost a language written on the surface of an alien planet. Perhaps he could develop a series in speculative fiction, The Vortex of Souvenirs. Something like those stories he read as a kid. He could use his Rex Packard character, leaving the spies and thugs on the surface of twentieth-first century Earth behind, to follow the trail of evil in a distant time of Steampunk shenanigans.

He thought of the email he had sent to Mélisande early in the morning, an email she had yet to respond to. Understandable. He deserved the silence. Time, he thought, time will see him through.

He had given up the struggle of writing a literary novel, The Under-glasse, a novel which he felt could fit in with the standard Canadian novel with its vast territory of guilt, failure, identity and conflicts of interest. Rex Packard lived again. His agent and publisher would no doubt be heaving the quintessential sigh of relief. What was he thinking they would all ask? A literary novel? The Under-glasse?! Midlife crisis? A love affair gone wrong? Male menopause?

Pavor had left Rex in the mansion north of Detroit looking over his text messages and watching MacGyver on the television. He had now slipped him into Montreal for the meeting with his former overseers. The return of Rex and Vernon. Picking up the sheets of paper, he began to read this second cast of the Packard line, hoping the hook and sinker would develop as the days progressed.

Rex Packard gazed intently at the palm of his right hand. A road map, topography unknown. What past or future could be seen in the lines of his hands, the arching life line, the yearning head line, and the dipping heart, rivers among the tributaries and striations of experience and the supposedly foretold? He rubbed his dry hands together as if they were cold and looked down at the open menu. The dissonant tone of an old-fashioned service bell sounded from the depths of the Mexican restaurant, an abstract sound of hope merged with hunger. Pavlovian. Melted cheese, chili, guacamole, tomatoes, beans, his mouth watering with anticipation. He could have used a Corona, but his el jimador with cranberry juice and Tabasco would do. The soft mariachi music danced with the susurration of the other customers creating a soothing background noise for his sense of social unease, being a solitary diner. He thought he would go for the Cactus Gratinado, and then, perhaps the . . . Enchilada.

A waitress wafted by, fresh-scented, vanilla.

“Do you still tell woman that you're twenty-nine,” a voice said, hand resting on Rex's left shoulder.

Rex disliked being taken by surprise. He usually took seats that offered a perspective on the room, the better to grasp any situation or newcomer of interest, but the restaurant was busy and he had had little choice. The sound of Vernon Smythe's cool enunciation was, he supposed, inevitable.

“Have a seat,” Rex offered, “I hear the Ceviche is very good this time of year.”

“Very kind of you Rex,” Vernon said, who sat down with suave casualness, crossing his right leg over his left knee like a chess movement. “So,” he continued, his grey eyes looking through Rex, “you've come a day early for our meeting, put yourself up at an expensive boutique Hotel here in old Montreal, and are enjoying some fine dining.”

“I suppose you know what hair gel I use too,” Rex shot back with a smile, “or perhaps, the tales I tell my hairstylist.” Rex sipped his drink thinking they must have extreme knowledge of all his movements to be such a few steps behind him. “Is it about the Russians?” he asked, thinking Vernon's hair had advanced to the stage of ashen grey.

“My dear fellow, we were the source for your Russians. We passed them on to you.” Vernon managed to smile a waitress down. “May I have a gin and tonic, my dear, a touch of ice and a twist of lemon. Thank you.” He looked around to gauge the distance of other diners. “I do hope they coughed up a decent penny or two.”

Rex looked at his menu and tried to remain calm. Think of a beach in Mexico, Rex, he told himself. Warm sand, blue seas, the gentle break of the waves. Palm trees, shade umbrellas, attractive women in bathing suits. “How many others have you been passing on to me?” Rex asked, raising his head and shifting it to the left the better to emphasize his concern.

“My dear fellow, we can't have you starving, can we?” He looked deeply into Rex's eyes trying to see if the penny had dropped. “You're our free-lance asset, you see.” He smiled as the waitress brought him his drink. “Thank you my dear.” Feeling that the staff and other diners would view them as Father and son, Vernon Smythe played the part accordingly, raising his clinking tumbler and offering a toast, “To your future, may it be prosperous, flamboyant, fragrant and brightly wrapped.”

Rex hesitated, but then raised his glass like a reluctant or recalcitrant son. The glasses were held aloft but did not embrace over the cutlery. "Something about the intonation of your voice every now and again reminds me of a cartoon character on television. Someone called, Stewie."

"I'm afraid your cultural references Rex, are quite over my head," Vernon said with a smile. "I have little time for television. And certainly not the news."

“Alfie . . .” Vernon sang the syllables, extending the second one with a dulcet touch. “Dionne Warwick is one of the great, and classiest singers of our age. The film was rubbish but the song, yes, the song will last.” Vernon sipped his drink looking at Rex to see if his cultural references had any effect. “What's it all about? Well, we have a rather . . . nostalgic bit of work for you.” Vernon withdrew a pair of glasses and began to read the menu, making a few humph sounds as he inspected the selected dishes offered. “You can relax your mind. It doesn't involve teaching additional Russians modern 'Democratic' methods on how to deal with dissent.” He looked over his glasses at Rex. “We hope your seminars have given them a new perspective. I don't think anyone is pleased to open their newspaper in the morning and see that another Russian journalist has been killed. We need the Russians to get with the program. Anything we can do to keep them from employing radicals from their former 'stans' to take out a busybody journalist or two is well worth the effort.” Vernon emitted another little humph sound as he read the menu. “They have red snapper, hmm.” He closed his menu and drank deeply of his gin and tonic.

“Did you know that this building goes quite far back? 1840s. Yes, you look surprised. Imagine,” he said looking about, “here we sit where the old printing presses and the artisans once laboured; the strong smell of inks and the fresh smell of printed books and papers in the air. Ah yes, history under foot.” He finished his drink and looked at Rex. “We'll give you a buzz tomorrow morning to set up our little meeting. I'm sorry I can't stay longer. Dinner engagement.” Vernon got up, nodding towards the bar. “Enjoy your evening young man. Don't party too late.” And with a wink Vernon was off.

Rex watched as he made his way out followed by a dark-suited associate who must have been keeping an eye from his perch at the bar. He looked back to where Vernon had sat and noticed a twenty-dollar bill under the tumbler, the remnant ice and slice of lemon a shimmering accent over the Queen's head.

Note: I created the above image using The Pulp-O-Mizer cover maker.
Posted by ralph mackay at 2:05 pm