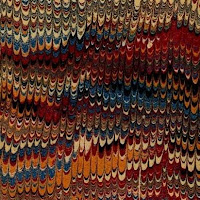 It was 7 a. m. and Jerome van Starke was as fresh as his coffee. He had slept well. If he had dreamed, he couldn't remember. He blew down over the steam rising from his cup, and gazed out the window at the trees and shrubs bathed in a sepia hue from the vaporous conditions. A squirrel, unconcerned, nimbly ran along a fence, jumping the finials like a gymnast. All colour was drained by this tenacious fog. Turning, he went over to the bookshelf and looked at the old cassettes, cds and LPs for music to play, something to fit his mood. His emotional state honed in on three cassettes by Pierre Flynn like a dry brush to an ink wash in a Chinese bowl. Choosing the singer-songwriter's Jardins de Babylon, he shook the tape in its case, savouring the plastic sound which was as much a memory as the music itself. Placing the tape in his machine, he pressed down on the aged button and listened as the rich baritone voice carried him away with Savoir aimer.

One of his songs referred to the world as “le monde de bascule.” He couldn't remember if it was on this album, but he always liked the phrase. It would make a good title for one of his paintings. Perhaps the one he was contemplating of Sappho and Alcaeus.

Imagining Thérèse walking the streets of Edinburgh filled him with a sense of calm. She could take care of herself.

He heard the phone ring. By the time he got halfway there, it had stopped. One ring. A common occurrence of late. He had little use for phones, but he felt his need expanding due to Thérèse and her leave taking. Perhaps he should give up his resistance to technology and join the fast moving mob with their devices and desires. As he stood looking down at the mute plastic sphinx, its old fashioned twisted plastic cord hanging off the table like a strand of DNA, he could almost feel the $2,000 cheque in his wallet swelling with the pulse of digital currents. He was holding onto the cheque until he cleared it with his conscience. For now, his portrait commission was a mystery. He would wait for the morning's revelations to unfold before moving back or forward, left or right.

When Duncan had dropped Amelia off at the small florist business in Westmount for 9 a.m., a business that wanted professional web page translation work performed, there had been a subdued feeling in the air. The traffic had been minimal. The pedestrians few. He felt he had been turning the page on a rather peculiar day.

At the shop, Julie informed him there was a message left on the answering machine from his friend Yves Boisclair, the former bass player with The Splices—the one who had had the van, the connections and the garage to rehearse—who now ran a shop selling old LPs and collectibles. The message related that a batch of albums had come in, some Dvorak with Kubelik, works with Tamas Vasary and some old Angels featuring Itzhak Perlman, items Yves knew Duncan was looking for. The message ended with “vien t'en donc, mon tabarnak!” It was a mutual light-hearted relationship. Duncan would inform Yves of anything interesting in his latest book purchases, certain authors Yves collected, certain editions he was looking for and Duncan would often end his messages to Yves with “au plus crisse!”

He would try to swing by Yves's place after dropping off the twines and ropes to Mr. Wing. Already the day was beginning to become one of those pages that fold out to reveal illustrative material within.

Tchaikovsky's violin concerto played by Kyung Wha Chung, with Charles Dutoit conducting the MSO commanded his speakers as he drove towards Chinatown. It was Yves who told him the story of one of the musicians of the Montreal Symphony back in the 1980s being a perfect mimic of Charles Dutoit, providing comic relief for the other musicians in the orchestra. He thought there must be a mimic in every business with over thirty employees. He tried not to think of the ancient orchestra politics as he listened to the music.

Moving his head from side to side to the sinuous lyricism, he felt he was outlining a figure eight infinity.

At the corner of St. Antoine and St. Pierre, he waited at a red light while memories rose slowly like the melancholy middle movement of the violin concerto. The towering hotels, the sprawling convention centre, the stylish Caisse de dépôt et de placement du Québec, and all the redevelopment of boutique hotels and condos still had the feel of a virtual rendering. Everything was so clean, neat and modern. Having lived through the undeveloped and lean decades of the eighties and nineties, it was still a revelation to behold. He thought nostalgically of the little shops, the corner tobacconist, the sandwich shop, the shoe and jewelry shops, and the old Tally Ho bookshop with the veritably unmovable heavy-set cigar smoking employee, who looked like he should be working at the horse track taking bets, who chewed on his stogie which bookmarked every page of every cheap paperback and pulp magazine with the aroma of astringent cigar smoke. The good old days. He started to feel like his Father. The light turned green and he drove on passing what used to be old restaurants, import businesses, Russell's Books, the Montreal Star and Gazette buildings, the old fire hall and the pub where the journalists would hang out. All gone but for memory. Stopping at another red light at the corner of St. Urbain, he looked ahead at the remnant block of crumbling early 20th century three story buildings, a row of nostalgia, where Steve's Music shop and Simon's camera shop still held dominion over time. The future had yet to level that block and throw up a forty floor hotel tower. He could still drop by Steve's and check out the guitars and feel he was that 16 year old rock star wannabe back in 1974. The same old creaky uneven floors, the same cramped space with every instrument and accessory, and possibly the same employees living in a time warp.

The car behind him honked. The light had turned catching him day-dreaming. He took the left turn on St. Urbain, and as he approached Viger, he looked up at the Holiday Inn lost in the fog—a building inspired by classic Chinese architecture—on a site where he remembered a few low buildings and parking lots. Montreal, he thought, must have so very many hotel rooms. He parked the car on Viger and with a shopping bag in each hand, made his way towards Mr. Wing's business, the string handles digging into his skin. The receptionist informed Duncan that Mr. Wing was not in the office at the moment, so he left his shopping bags with the young woman who he felt smiled almost sadly, as if she knew all about his slipping business and Mr. Wing's continued support, even though such supplies could be had much cheaper. Duncan smiled and thanked her, a tinge of self-consciousness overcoming him, feeling like the poor relative. He had included a slim, soft cover book on chess which he thought Mr. Wing would find of interest. Duncan knew he had a large collection of books on the game. If he already had a book that Duncan offered, he never let him know. Always a handwritten note of thanks with the cheque in an envelope addressed by hand.

At the corner of La Gauchtière and St. Urbain, waiting to cross, he stood gazing up at a corner building. He remembered when Yiyin had taken him up the stairs to the art supplies store. On the first landing an open door had revealed a windowless room with numerous elderly Chinese playing Mahjong. It was a vivid memory. The aged players nosily mixing the tiles and talking before turning and silently looking at the young Caucasian man and young Chinese woman staring at them from the shadows. The mixing of the tiles and the talking had resumed once they moved on to the art store, no doubt spiced with comments on the unusual visitation: 'What was the world coming to?' 'In my day, unheard of.' The year must have been 1978. Duncan still had the bamboo holders, inks, and brushes they had bought that day, though he imagined the ink must have hardened in the blue and white porcelain container by now.

He decided to continue along La Gauchetière enjoying the colourful window displays and the signage. Many new ventures with some old ones here and there. At the corner of Clark, he stood looking across at the modern corner building where the Tean Hong Café used to be, the restaurant where they had had many a dimsum and seemingly endless cups of green tea. It had burnt down long ago and this new structure had risen. It was as if the café had never existed. He still had the plastic chopsticks with the restaurant name though. Souvenirs from the past.

“Excuse me sir,” a voice said, “are you looking for a certain shop?”

Duncan turned to see his questioner, a pleasant young woman probably the age of Yiyin when they were together. “Oh, thank you, no,” he managed haltingly, “I'm just looking . . for the past.”
The young woman nodded thoughtfully before walking away into the foggy morning, the short melodramatic scene imperceptibly fading with every step.