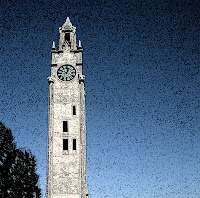 Faltering at the corner of Dark and Light, he stepped back into the shadows, the distant shimmering of an asphalt mirage reflected in his eyes. Falling, he stretched out his arms. The darkness rose to embrace him and he found himself walking slowly alongside a large tent structure, its pennants fluttering a semaphore in the dim light; he tripped on a guide wire and landed upon a lawn heavy with dew. A light in the distance led him to a narrow passage leading up to a rough concrete walk. A redheaded woman with feline eyes ran past him. She looked back. He felt he must follow her; anxiety and dread rose up in him like a bile and he ran, ran towards the woman who was escaping from something behind him.

A white tower against an oddly muted electric ultramarine blue sky, appeared above the trees. He followed her into the tower to find a brightly lit vortex rising above him, a heavy bell-ringing cord rising up through the middle. He climbed the spiral staircase, staying close to the outer wall as there was no inner railing. The red-headed woman with the feline eyes had scaled the steps effortlessly, leaving him far behind.  Finally reaching the top, he saw the woman on a window ledge, her hand on the rope, a rope leading up into the sky, attached to what he could not see. She pushed herself off the ledge with her feet and was swept up, out of sight. He too gripped the rope but it became as smooth as polished marble and he found himself slipping down through the eye of the vortex to the ground.

Duncan awoke to find his hands around the wires of his headphones, his wife sitting gingerly on the end of the bed, Hugh wagging his tail and looking up at them.
“Have you been asleep for long? You were fast asleep.” Amelia thought how the word 'fast' was so nonsensically versatile. On a fast, fasting, and fast living. From abstinence to self-indulgence.
He breathed deeply, stretching, trying to find words but could only maunder incoherently, hardly knowing what day it was. He hadn't heard his wife's question. Still in the haze of the dream that was quickly evaporating, he pulled the large padded headphones off, and managed to push his conscious mind to the fore and moan about how he had only been resting, reading, listening to music, but he must have fallen asleep.
Amelia rubbed his foot as he lay there gaining his faculties.
“How was your lunch with Jacqueline?”
Amelia said it had been very good, they did a bit of shopping and had a pleasant lunch. She told him she had invited Jacqueline and her husband to dinner at the end of the week. She thought she would leave it at that, not disclosing her disclosures. She picked up a paperback book fallen to the floor, The Best of Cordwainer Smith, and placed it on the duvet beside the cds of Arvo Part and the soundtrack to Trois Coleurs Bleu that Duncan had presumably been listening to. Then, picking Hugh up, she plopped him down on the bed and snuggled up beside them both.

“Tomorrow I have to bring George III to the vet,” she said. “I drop him off around 9:30 and pick him up at 4:00. I was thinking we could have dinner with Uncle Edward.”
“That would be nice. Oh dear, I'm sorry, I'm a bit groggy. That three o'clock Sunday afternoon snooze gets me every time," he said, random images of his recent dream slipping away from him like waves rushing back to the sea.
"How was your day?" Amelia asked.
He yawned, "Good, good. I  tidied up the house (don't worry, I didn't disturb your desk) and then I took Hugh for a walk but I felt a bit off so I came home and then went out again to pick up the items we needed. I was in line at the shop and in front of me was a rather grumpy looking women with an old brown dog. The portly old Labrador retriever turned and looked up at me with such sad eyes I just melted. I've never seen such a sad expression on a dog. I put my hand down and he perked up and began to lick my hand, his tail wagging. I didn't see that he sported a yellow vest which said do not pet, a working dog. Well, I broke the law and petted him. Poor thing, he seemed deprived of affection. Although she wore glasses, I couldn't see how the woman needed a working dog, she didn't seem to be visually impaired. Her husband was beside her and his vision seemed fine. He too was grumpy and rather sallow. Poor dog I thought. Well, I felt I brought a bit of happiness to a living being today. Brightened up his day.”
“It might have been a seizure dog.”
“Oh, I didn't think of that.” He paused thinking of the ramifications.
“Sounds like the old dog needed a bit of affection though. Lucky dog."
Duncan gave Amelia a squeeze, kissing her hair and breathing the lovely scent of her. "Thank you my dear."
"Remember the German Shepherd on the train as we sat for hours at the border waiting to go on to New York?" Amelia said. "You seem to have a blind spot with working dogs."
"Hmm, perhaps. Remember the odd questions the border guards were asking people."
"Yes, right out of left field."

Hugh sensed a moment of calm between them as they lay on the bed riding the wavelets of memory. He raised his head and licked Amelia's cheek.
“Yes, Hugh, my little baby. I don't think you would be a very good border dog, would you?” she said giving him a hug. “It's Uncle Edwards's birthday soon. I talked with Mary and we are planning a special meal. I ordered a cake yet I wonder if we should come up with something innovative for the 92 candles.”
Duncan lay there wondering if Uncle Edward at 91, still healthy, still living in his mansion, would outlive George III and go on to find another Airedale to name George IV. Perhaps even outlive another housekeeper like Mary. It must be difficult to outlive so many of his friends and relatives he thought. “Hmm. Perhaps they might have a a figure of a man and his Airedale. You never know.”
“I will see if they do. Good idea. For the candles, nine on one side and two on the other would work. Or perhaps candles in the shape of 92.”
“Brilliant my dear, brilliant.”
“What is the envelope on the kitchen table by the way?”
“I don't know. It could be the manual for Dr. Who's Tardis for all I know.” He told her how he came to find it and how he was waiting for her to make a decision about what to do.
“I wonder who was living here before us?”
“Wasn't it a single woman?”
“Do you think it's money?”
“No, It feels like a thesis.”
“A thesis? That's not very exciting. Come on, let's take a look.”

Duncan delicately cut the top of the plastic and slipped the sealed vanilla envelope out.
“Maybe you should wear gloves,” Amelia said.
“It just feels like paper. I'm sure it will be fine.” He used the scissors to cut the edge and they both peeked inside. It certainly looked like a thesis. He drew it out and the uppermost page was blank. The upper left corner held an old-fashioned copper brad which bound the papers together. It looked to be about half a package of printing paper. He swept the envelope aside and positioned the papers between them and turned the first page.

They looked at each other with raised eyebrows. Duncan turned a few more pages. Then he riffled the pages from the back and they saw it was all the same. A jumble of numbers and letters that mimicked a text.

Hugh scratched at the envelope that had fallen to the floor, then he sniffed it before looking up at them. “Sherlock Hugh is already on the case,” Amelia said.

Text and image © ralph patrick mackay
Posted by ralph mackay at 10:03 am