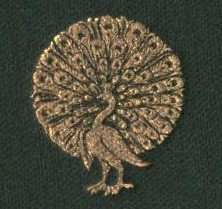 Dust motes rose in the morning sun from the faux-fur slipper--a sacrifice of Amelia's--which Hugh grappled with on the kitchen floor. He paused to look up at Duncan who sat at the kitchen table, pen poised over a company note pad, Strand Cordage Ltd., with the beginnings of a list, Bananas. Hugh sighed and rested his nose in the slipper, the illusion of a rabbit between his paws fading. The human scent, the reassuring scent of Amelia, a balm to his intrinsic instincts. They shared eye contact, blinking in unison, both thinking of her.

Bananas. Duncan tried to think of the other items they needed which had occurred to him only minutes ago, but they seemed elusive as fruit flies. Amelia would be greeting her friend Jacqueline at about this moment, kissing each other on the cheek, admiring each others outfit and entering their favourite café for a little brunch and conversation. He pictured them, two translators from different factions, exchanging stories of recalcitrant authors, manipulative editors and unruly deadlines. He heard the stories too, but it was different when she shared them with Jacqueline. He could sympathize, be a sounding board, be understanding and comforting, but her friend could truly identify. He was glad they had met at a conference.

Bananas, Cucumbers. He looked down and wondered if there was a theme here. Baguette. . . dish soap, capers, artichoke hearts. That was good enough to get him going he thought.

The radio played softly in the background, an eighties song. The eighties, a nostalgia dovetailed with commercial interests, were popular again.

After having looked through the weekly flyers for sales, he turned over a few pages of the free arts paper and noticed an advertisement for the latest Cirque du Soleil show. He closed his eyes as he gathered all the papers into a pile, and sat quietly as memories rose up like bubbles, a natural effervescence in search of release. He took the papers and placed them in the small recycling bin under the sink, and then stood at the back door trying to remember the exact year. It had been quite cold he remembered. Late January or February. Yes, the year he believed was 1982. February 1982.

He saw his twenty-three year old self emerge from the Metro station on a cold dark evening, uncertain, anxious and late. The Maurice Richard Arena lay before him in the distance like a dimly lit space ship. He felt for his wallet in his back pocket where his ticket to see the Great Circus of China was neatly ensconced. Entering the building, he was enveloped in the exotic and strange music of the east, gongs, cymbals, erhu and other instruments putting speed into his steps for the show had already begun. An attendant seemingly annoyed at his appearance pointed the way with his flash light down the aisle and to the right. Seeing a few seats to the right on the third row, he begged forgiveness in his best French as he awkwardly progressed towards them. A few grumbles and sighs arose from those less empathetic, not seeing themselves in such a position. Feeling quite fortunate to have an empty seat beside him, he draped his winter coat over it and gave himself over to the wonderment of this very special performance.

Never before had he experienced such skill and beauty combined. The young Chinese women were very attractive in their colourful silk outfits and exaggerated eye make-up. They twirled plates on multiple long thin sticks, smiling demurely, their dark eyes radiant with controlled emotion as they walked with graceful movement.

The next thing he realized, there was a white light flashing in his direction and he looked to his left to see the attendant making his way towards him. Not his night he thought. He asked for his ticket. Duncan blushed with embarrassment in the dark. The anxiety which had risen like a spasm, began to spin like the performer's plates as the attendant informed him that Duncan's ticket was for the first row. A domino effect in motion, he watched the attendant make his way between the stacking seats to talk to a young man in the front row. Duncan saw the dark outlines of two people in the aisle waiting for the seats he occupied, and he also noticed the older woman MC of the show looking over his way, wondering why there was a commotion. The attendant waved him forward with that most ancient of hand gestures. As he approached his real seat, the young man who had for reasons unknown placed himself in the first row, passed Duncan and they shared an exchange of looks that remained vivid to this day. He could see his face as if it were the reflection in the window before him. There was no animosity to be read from his passing expression. A tinge of guilt at having ousted his impostor made him say, "pardonnez-moi" as they passed. Sitting down, he felt the residual warmth of the now phantom occupant.

He was not one to draw attention to himself. He had been quite content in the third row, yet here he was, ushered into the limelight that splashed the first row around the ring. Some of the performers and a few of the musicians sitting sideways on the curtained stage behind, looked his way, naturally inquisitive in the scene taking place. For a moment it made him feel like a VIP being shown his seat, arriving fashionably late, and this thought seemed to give him confidence to overcome his embarrassment. He pretended to look slightly important, and was pleased he had dressed in his fine wool turtle neck sweater and sports jacket.

Then two pretty young women came out, placed themselves on their backs on curved platforms, and began to juggle an assortment of large items with their slippered feet: chairs, enormous colourful Chinese vases, boxes, and carpets. Their finely contoured posteriors were elevated by the platforms and at a slight angle towards Duncan's seat. He felt a rise in his temperature and heart rate both due to such breath taking skill and for his trying not to to stare at their shapely physiques and keep his eyes on the spinning objects above them. At one moment during their twirling of the fine woven carpets around in circles like horizontal dervishes, the performer closest to him looked sideways and caught his eye for a few seconds.  The eye contact brought him closer to the experience, overcoming the spectacle with the personal, overcoming their divergent cultures with a shared moment. She was not just a circus act, but a young woman behind the make-up.

An evening filled with a display of 2,000 year old athletic astonishments: young male acrobats flying through flaming hoops, martial arts with swords, high wire acts, contortionists bending themselves in half and balancing items on their heads, and the rousing finale of a bicycle slowly circling the ring picking up a few acrobats each time until its metamorphosis into a towering tree-like form, a colourful peacock with its feathers expanded to full extent, left him in awe.

Duncan brought his hands up to his face and rubbed his eyes. Thirty years ago, he thought. It seemed like another life. The young man he had supplanted was, he believed, the man who was now worth almost three billion dollars. It was unlikely he would ever know for certain that it was the future founder of the Cirque du Soleil, but the resemblance was there. Who knows, it could very well have been a bartender from Beloeil, but it was Duncan's personal myth, a cautionary tale in making him mindful of opportunity, even though, at the time, he was not a street performer finding influences from the east, but a young man having escaped a family business and adrift from a relationship with a young woman from Hong Kong.