The Man Within My Head by Pico Iyer 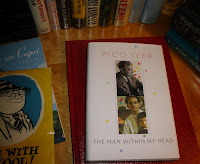 When my attention was first drawn to this book a few months before publication by my wife, a librarian, I thought how intriguing. She knew I would find it so. It surprised me to hear that Graham Greene had played a significant role in the life of Pico Iyer. They were not authors I would have associated as having much in common. I had read a few books by Pico Iyer and enjoyed his subject matter and style, and I have, like many, read a great deal of Graham Greene's works over the years and enjoyed them as well. I began to visualize a Venn diagram to try and see what they had in common. My knowledge of Pico Iyer's life was limited but I could see that they were both writers, both had English schooling, both travelled and used their travel experiences in their work. The well known “Greeneland” landscape with its Catholicism, guilt, spies and solitary male protagonists seemed to be absent, more the terrain of John Le Carré and other writers.

It is a difficult book to review without spoiling it for other readers for it conceals a shadowy influence between the two writers as if written in sympathetic ink, with Iyer providing the necessary heat to reveal its nature in this “counterbiography” of his “unsought familiar.”

This is a book that is utterly fascinating to read and provides a rich texture of insights into both Pico Iyer's life and Graham Greene's life and writings. It is a book that bridges the gap between such books as on the one hand, Shirley Hazzard's “Greene on Capri” with her intimate knowledge of the day to day Greene with all his idiosyncratic mannerisms, moods, issues and baggage, and on the other hand, the exhaustive pursuit of the details of the writer's life by Norman Sherry. Pico Iyer explores the shadows of influence, for he never sought out Greene, nor at first thought of him as being the one to have such influence. Logically he thought he had more in common with the life of Somerset Maugham or Aldous Huxley and such is the fascination as we learn how Greene's life and work was a much deeper and more consistent presence as Iyer travelled the world and recognized and experienced facets of "Greeneland" first hand.

The book is divided into three parts, 'Ghosts,' 'Gods,' and 'Fathers.' Each is interlayered with stories of Pico Iyer's travel, autobiographical revelations, interpretations of Greene's works, the often poignant interplay of fathers and sons, and the dance of opposites and dualities such as idealism and skepticism, shadow and light, east and west. The writing is wonderful and each page will find a place in someone's mind.

I think I will leave with a quote of this ultimately very readable and quotable book:

Graham Greene the novelist appeals to some of us, I think—even challenges our sense of who we are—in part because he is so acutely sensitive to all the ways we can fail to unders

tand one another, even those people closest to ourselves; he knew his characters, he wrote in his memoirs, better than he knew anyone in real life. He becomes the caretaker of that part of us that feels that we are larger and much harder to contain than even we can get our heads around, and that there is a mystery, fundamental and unanswerable, in ourselves as in the world around us, which is in fact a part of what gives life its sense of hauntedness. It's the best side of us, in his books—our conscience, our sense of sympathy, our feeling for another's pain—that causes us the deepest grief. And God, if he even exists, is less a source of solace than a hound of Heaven, always on our path. (pg. 39)
Posted by ralph mackay at 2:44 pm