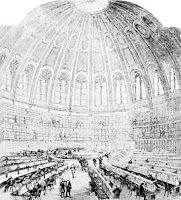 When Robert Louis Stevenson lived in Bournemouth during the years 1884-1887 he would often stay with Sidney Colvin when visiting or passing through London. Colvin, being the Keeper of the Prints at the British Museum, had the great fortune of living in a house provided for this position, a living quarter which flanked the Museum itself. It was no doubt where Louis was staying when he dropped by Walter T. Spencer's bookshop in 1885--but a short walk away from the British Museum--dripping with rain and suffering from a leaky shoe. Many years later, when established in the South Seas, he wrote a poem for Colvin called To S.C. It became part of the posthumous collection Songs of Travel and Other Verses arranged by Colvin and published in 1895 by Chatto & Windus. In the poem he shifts his thoughts from his tropical surroundings of his island home and recalls the fond memories of being a guest at Sidney Colvin's home at the British Museum, a home which Louis would refer to in letters and conversation as "the Monument" and here as "the many-pillared and the well-beloved":

To other lands and nights my fancy turned -
To London first, and chiefly to your house,
The many-pillared and the well-beloved.
There yearning fancy lighted; there again
In the upper room I lay, and heard far off
The unsleeping city murmur like a shell;
The muffled tramp of the Museum guard
Once more went by me; I beheld again
Lamps vainly brighten the dispeopled street;
Again I longed for the returning morn,
The awaking traffic, the bestirring birds,
The consentaneous trill of tiny song
That weaves round monumental cornices
A passing charm of beauty. Most of all,
For your light foot I wearied, and your knock
That was the glad réveillé of my day.

One of Colvin's colleagues at the British Museum was Richard Garnett (1835-1906) a scholar whose life was wholly bound up with the British Museum from the year 1851, when he entered the Museum as an assistant in the Library, to his later years as the Keeper of the Printed Book. Colvin in his Memories and Notes of Persons and Places, 1852-1912, recalled Garnett with this description:

The most genially quaint of erudite men, the most helpful, the most smiling and queerly attractive to look at in spite of his stained teeth and bristling russet stubble of a beard, he was not, I suppose, a trained bibliographer in the full modern sense, but had a vast and varied practical knowledge of books and the most indefatigably obliging courtesy in helping all those who sought his help in their studies. Sedulous as he was in every museum duty, Garnett found time for a vast amount of reading and much miscellaneous critical and biographical writing outside his official work, and has left with all his colleagues a memory at which we cannot forbear to smile, but which we affectionately esteem and honour none the less. (pp. 208-209)

An interesting description which seems to suggest he was mildly eccentric. In Garnett's Times obituary the term vita umbratilis is referred to describe his career and it is doubly apt when considering he laboured beneath the umbrella-like protective dome of the Reading Room. Someone who was connected with the Museum from time to time was T. E. Lawrence--who could possibly be seen as eccentric in some ways as well. In an introduction to a reissue of one of Garnett's books, Lawrence wrote of him and the Reading Room of the British Museum:

The Reading Room, his province, is wise, rich, sober, warm, decent (even dingy), industrious; but it lacks humour, it lacks polish, and all that crackling display of surface virtue which comprehends smartness, and is much more. Consequently, because the Museum was hushed, Dr. Garnett would be--on paper--lively. Because the great ceiling coved so solemnly overhead, he would be flippant. Because his readers were so deadly serious, he would be sprightly. . . His dealings throughout the open hours were with living people, inquirers all, whether they were great scholars with minds so deep in the well of learning that never could they be raised to the life of day, or simple souls who had perhaps not heard of Sanchoniathon or Vopiscus. People would sidle up to him at his desk to ask for the best book upon caterpillars, for a Keats manuscript, to know how many protons might be in a cubic foot of Bessemer steel. The Library is the ultimate reference book of the world, and its presiding genius the Index.

Lawrence interestingly mentions in an aside, that the British Museum was an ideal place for umbrellas to find a home: "Incidentally this is the best place in London to lose an acquired or embarrassing umbrella. It costs no more than the pain of carrying off a brass disc; and that's not all loss, for there is one special pattern of slot machine in which these discs perform miracles." This little piece of advice from 1924 has left me with the image of T. E. Lawrence handing over an unwanted umbrella to the man at the door in red cuffs and lapels, and being handed a numbered brass disc, and has equally left me with the question of just what slot machine he was referring to.

The falsity and the folly of the human race have degraded that graceful symbol to the ends of dishonesty; and while some umbrellas, from carelessness in selection, are not strikingly characteristic (for it is only in what a man loves that he displays his real nature), others, from certain prudential motives, are chosen directly opposite to the person’s disposition. A mendacious umbrella is a sign of great moral degradation. Hypocrisy naturally shelters itself below a silk; while the fast youth goes to visit his religious friends armed with the decent and reputable gingham. May it not be said of the bearers of these inappropriate umbrellas that they go about the streets ‘with a lie in their right hand’?

A passage near the end of that funny essay is perhaps too good to pass up:

‘Not the least important, and by far the most curious property of the umbrella, is the energy which it displays in affecting the atmospheric strata. There is no fact in meteorology better established—indeed, it is almost the only one on which meteorologists are agreed—than that the carriage of an umbrella produces desiccation of the air; while if it be left at home, aqueous vapour is largely produced, and is soon deposited in the form of rain. No theory,’ my friend continues, ‘competent to explain this hygrometric law has been given (as far as I am aware) by Herschel, Dove, Glaisher, Tait, Buchan, or any other writer; nor do I pretend to supply the defect. I venture, however, to throw out the conjecture that it will be ultimately found to belong to the same class of natural laws as that agreeable to which a slice of toast always descends with the buttered surface downwards.’
Light verse addendum:
I came across this saying in Putnam's Complete Book of Quotations, Proverbs and Household Words by W. Gurney Benham:
Rainy days will surely come,
Take your friend's umbrella home.
-Anon
And this from a book of comic verse:
The Rain
The rain it raineth every day,
Upon the just and unjust fellow,
But more upon the just, because
The unjust hath the just's umbrella.
-Anon
This last verse could be a companion to Robert Louis Stevenson's in his A Child's Garden of Verses:
The Rain
The Rain is raining all around,
It falls on field and tree,
It rains on the umbrellas here,
And on the ships at sea.
And on a personal note, my wife recently referred to umbrellas in a blogpost and quoted a verse of mine written in the early 1980s. I had been reading quite a bit of nonsense verse and cautionary tales, the work of Lear, Belloc, Carroll et al., and I wrote a flurry of light verse--or nonsense-- in that vein. Since I have digressed upon umbrellas, I shall leave with two verses of mine:

Umbrellas
Umbrellas were once made of feathers you know,
With two you could almost fly.
Like that girl from Trieste, in that strong north-west,
Who was swept up into the sky.
And when she looked down, she saw with a frown,
Her parents were waving goodbye, goodbye,
Her parents were waving goodbye.
Umbrellas are good in all sorts of weathers,
They can even be used as a boat.
Like that boy from Madras,
To impress a fine lass,
Crossed a stream like a knight o'er a moat.
And together they travelled, the stream that unravelled,
And off in the sunset did float, did float,
And off in the sunset did float.
-ralph patrick mackay
Posted by ralph mackay at 2:38 pm