Tipped In, or, The Capart Conjecture 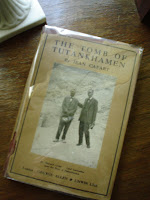 I enjoy coming across older volumes with paper spine labels, rare though these occasions are, for it offers the possibility of finding a spare label pasted in at the back of the book. This anticipation is, I realize, a small bibliographic pleasure, one that to a non-bookish type would likely be incomprehensible, but there is something satisfying in finding a stand-in label tipped in between the endpapers, crisp, complete and unblemished by age, biding its time like some treasure stored in a tomb. 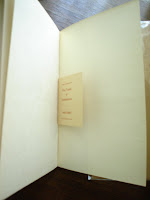 Looking over my books, I realize how few in my possession have paper labels, and of those, less than half have spare labels at the back. Jean Capart's The Tomb of Tutankhamen translated by Warren R. Dawson and published by George Allen & Unwin Ltd., 1923, is a book I have had since the late 1970s and though the dust-wrapper is brittle, darkened, chipped and suffers some loss at the head and foot of the spine, it has kept the paper spine label in decent shape. The books I have that could use a fresh label, lack them. It seems an axiom--at least a Chumley one--that if you have a copy with a spare tipped in at the back, it probably doesn't need replacing. 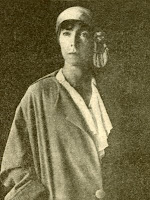 A note on the book: The cover image is a photograph of Howard Carter and Lord Carnarvon

pasted down on the upper panel of the dustwrapper. The photograph, also reproduced within, was taken by Her Majesty Queen Elizabeth of Belgium whom Jean Capart had accompanied to the opening of the tomb of Tutankhamen. Jean Capart named the Foundation Egyptologique Reine Elisabeth after this most interesting Queen.

Looking at pictures of Jean Capart, one could conjecture that he could have been a possible influence on Agatha Christie in her characterization of Mr. Hercule Poirot. It seems unlikely though. I imagine many Belgium men of the period were well-dressed, had interesting mustaches, bow ties and spectacles. The fictional detective first appeared in The Mysterious Affair at Styles, published in late 1920, many years before Agatha Christie became involved with the younger archaeologist Max Mallowan. The latter must have come in contact with Capart at some time in his career but that is probably where this fanciful notion can be played out. But then again, Capart was fairly well-known, having published a number of books on Egyptian Art in the first decade of the new century. I guess it is just my own Capart Conjecture.

The picture to the right of Jean Capart is of Her Majesty Queen Elizabeth of Belgium.