Harper & Brothers can trace its roots to 1817 when, James and John Harper--true "partners" in the printing trade--having completed their apprenticeships, opened their own business called J. & J. Harper. They were initially job printers, John being know as the better compositor and James the better pressman. The first book to have their name on the title page was a book they printed for the publisher/bookseller, Evert Duychinck, Seneca's Morals by Way of Abstract. To Which is Added, a Discourse Under the Title of, an After-Thought by Sir Robert L'Estrange. Their first book as a publisher was an issue of Locke's Essay Upon the Human Understanding, an edition of 500 copies. The names Evert Duychkinck, Richard Scott, J. & B. Seaman and a few others were included on the title page as subscribers for agreeing to each take 100 copies for sale. A smart way of covering their production costs. The title pages of their early published works are quite elegant, clean and classical, the lines of type in upper case, alternating in larger and smaller sizes. There is no use of publisher's devices at th 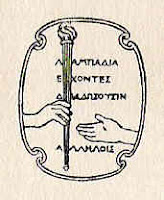 is time. They changed their name in 1833 to Harper & Brothers, and the rest is quite a history. One source says that the firm came across the motto for their publisher's device as early as the 1830s, but I cannot find examples of it being used in their early imprints. It seems to become fairly common from the 1870s, and may have been a result of the improvement in printing presses. It seems cylinder presses which began in 1875 greatly aided the use of engraved cuts in the printing process.

Looking at a few older Harper & Brothers books, I found a number of variations on their device, and no doubt there are many others. Having no Greek, I always casually interpreted their motto according to the image, which seemed fairly straightforward, the handing on of the flame of knowledge. But with light research into various sources on Harper & Brothers, the quote is traced back to Plato's Republic, Book 1, and refers to a torch race at a Festival in honour of a Thracian Goddess: "Running in the race they pass the torch one to another." Harper & Brother's private office fitted out in the 1 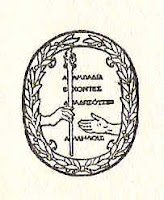 870s, had the words of George William Curtis inscribed over the chimney, a hearth motto for the office which is apparently a paraphrase of the house motto: "My flame expires, but let true hands pass on / An unextinquished torch from sire to son."
The device in the upper left corner is from an 1876 edition of Wilkie Collins. The torch, or "fax" in classical literarture, is described in the Harper Dictionary of Classical Literature and Antiquities by T. H. Peck (New York, 1898) as: "The torch. The description of poets and mythologists, and the works of ancient art, represent the torch carried by Diana, Ceres, Bellona, Hymen, Phosphorus, by women in bacchanalian processions, and, in an inverted position, by Sleep and Death." (p. 664) The switch to a vertical device with a modified shield comes from a book published in 1906. The third image with what is likely laurel leaves with a more rustic torch is from a Harper & Brothers imprint from 1924. The fourth is from 1942 and the crown of leaves surrounds a torch that hearkens back to the original of 1876. 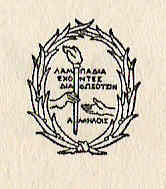 In 1962 the firm merged with Row, Peterson & Company to form Harper & Row. They kept the image of the torch alive in their modified publisher's device seen

on the right. Even today, as HarperCollins, they have retained the torch in their device. A lengthy history of torch bearing there.

In The House of Harper: A Century of Publishing in Franklin Square by Joseph Henry Harper (1912)--from which I gleaned much of the information here--there are two anecdotes--out of many--that come to mind. The first is rather a sad story about the horse the brothers employed to run the presses when they were in their start-up years before they had advanced to steam. This horse for many years went around in circles to run the presses, with a midday break for its lunch. When they retired the horse to their father's farm, it would go in circles around a tree in the pasture, and at midday return to the barn for feeding, then return to the tree to continue its circular endeavors. The second story has the hallmark of the apocryphal but could possibly be true. John Kendrick Bangs, an author much connected with Harper, told the story of how his father and a good friend having left their club after a late dinner, came across a rather forlorn looking man leaning on a lamp post, his hat in the gutter. His father retrieved the hat and upon receipt, the man thanked him with magnanimous and eloquent courtesies. When his father inquired of the man's name, the man said with dignity, "Mr. Edgar Allan Poe." His father responded by saying that was very interesting as his name was "Tay" and his friend's name was "Toe", to which the afflicted author responded in kind, before walking off into the night, that they were well met, for together they made Potato. Poor old Poe. Speaking of Poe, in 1838, Harper & Brothers published one of his works, The Narrative of Arthur Gordon Pym of Nantucket. It must be one of the contenders for the longest subtitles on record. On first look, the layout of the typography detracts from the visual appeal of the title page, but on second look, it does seem to mimic a nautical vessel, and was likely a creative intention, the compositor doing the best they could with a seemingly intractable book title. The original imprint can be read here.
Posted by ralph mackay at 8:45 pm