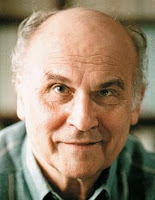 There is nothing unusual about an author in a bookshop--a veritable cliché. As likely as a hand in a glove. Thinking about it now, I wonder if it was but a daydream.

When operating a brick and mortar bookshop, I did have a variety of writers and illustrators visit on occasion. Some well known, some less so. It seems I had to open my own shop in a small Ontario city to have the experience of seeing an author browsing bookshelves in public. Having lived in Montreal most of my life, and a frequent visitor of most Montreal bookshops, French and English, I can't recall ever seeing a well-known author casually browsing. This lack of observational success would seem almost an example of carelessness. Then again, in my defense, my eyes were usually preoccupied with the lettering on book spines, my neck twisted to the side in a classic book browsing position. Also, it was long before book festivals like Blue Metropolis brought world renowned authors to the streets of that fair city.

So, there I was, sitting at my desk in the corner, when a professorial looking older man entered my very small bookshop. (I always greeted customers with eye contact and a hello. By dipping my toe into the waters of conversation I never knew where the small talk might lead. On many occasions it brought interesting discussions--people often sitting down in the chair in front of my desk, easing their physical and mental burdens and making themselves at home--while others lead but to the shallow depths of meteorological concerns. Some never made it past the greeting stage.) The man who had entered the shop reminded me of a neighbour on the street where I grew up, my best friend's father, an Edinburgh educated professor of Philosophy at McGill University specializing in Kierkegaard, now long retired and an Emeritus Professor. He quietly moved about the shop with a sense of shadowless energy. This was a man who was in no need of assistance. Someone who was at home amongst books. Looking intently at a bookcase only a few feet from me, he reached out and pulled a hardcover book from the shelf. He turned to me and said with a slight European accent, "This is a very good book, you know." The intensity of his eyes and the force of his confidence startled me. Slightly taken aback by the assertion, I agreed that it was indeed a very good book . (I now wonder why it had not moved for three years. Perhaps I had priced it too high. Perhaps I really wanted to keep the book for myself.) Having read the book many years ago, I felt less than confident in broaching the subject matter with the customer who looked so intellectually spry. Betting on my memory, I waited for a response, hoping he might elaborate and open up the possibilities for discourse. In a way it was rather like a game of chess. He had surprised me with an unusual opening move and

I had responded with an awkward conventional response. He put the book back in place and looked about for a few more minutes, and then he turned and thanked me kindly with a nod, and made his way out the door. The game aborted, our respective pawns left at the border. I felt rather mystified.

I then went over and pulled the book out. Even though the man's physical appearance made me think it could possibly be the very author of the book, I was also thinking it couldn't have been; the likelihood of the author dropping by my little shop in a rural city in southern Ontario seemed so unlikely. I had read a number of his pieces in Granta Magazine over the years, and some of his works, but I was not familiar with his changing physical appearance. The book he had pulled off the shelf was Imperium by Ryszard Kapuscinski, the 1994 Canadian first edition, over ten years old at the time. The rear flap of the dustwrapper had what seemed to be an even earlier photograph of the author. I could see the resemblance. A younger version with those intense eyes. I walked quickly to the windows and looked out, but I did not see him. Out on the stoop, I looked up and down the street but he had quite vanished. I contemplated closing the shop and running out to find him, Imperium in hand like some madly obsessive Ryszard Kapuscinski collector.

But no, I remained where I was--trapped by new customers having entered the shop--wondering if indeed it had been the author. The remainder of the day was spent in creating imaginary conversations with him. I imagined us walking about the city streets, feeding the swans on the Avon, discussing great topics and great writers. Then I saw us repairing to a fine restaurant for a good meal and a pint of Guinness. Cigars and cognac were probably conceived, the author regaling me with stories from his travels and extraordinary experiences. Such was the imagination of a bookseller who spent his days behind a desk surrounded by books and dust, daylight framed by a shop window.

I remember carrying the book in my book bag as I traversed the city over the next few days in case I happened across the him sitting in an outdoor café or buying toothpaste at a drugstore, but I was not fortunate in this serendipitous concern. I did not, however, stop people on the sidewalk asking if they had seen Ryszard Kapuscinski by any chance. Trying to sell books was crazy enough.

This unusual brief encounter with the author, or his doppelganger, I took as a form of admonishment and put the book back in my personal collection for future reference and re-reading. One day, perhaps, he would be in Toronto for a literary festival and I could try to approach him for a signature and ask him if had ever visited my small shop in a small southern Ontario city and, coming across this very volume, had asserted how very good it was. The meeting, however, was not to be. Ryszard Kapuscinksi died in January of 2007.

It it wasn't the author who visited my shop, then his doppelganger makes it doubly interesting. I think I would rather have the question to this one, than the answer.
Posted by ralph mackay at 3:12 pm

I'm reminded of a chance bookshop encounter, my only with an author, in January 1985 at Montreal. I was buying a used copy of Hugh Hood's White Figure, White Ground when a voice spoke up: "Hey, that's my book!" Sure enough, it was the author. He did me the honour of signing the book (a first edition, very well read and a bit abused) and left. Later that same afternoon, I was browsing in another bookshop when Hood walked in. I expect that, like me, he was making the rounds. A generous man... still, I wish he'd offered me a lift. Never saw him again.

Nice story. I grew up on Grand Boulevard in about the same spot as Hugh Hood's house three streets over on Hampton. I probably stood behind him at a corner shop on Monkland or passed him in the street when I was kid, but I don't recall seeing him when I was a relatively cognizant young person. Surely I would have spotted those trademark eyeglasses. He died too young.