The Discipline of Geography, or, A Little Fry and Parker

Here are two books whose narratives spring from an internal compass rose; narratives that follow their own cardinal points in an organic way in that each comes from a life-long fascination, one with America, and one with maps. Both books are well-written, funny and informative, and both are by residents of the UK who have had their hand in comedy at one time or another. Both authors have also been involved in writing and hosting documentaries on various subjects. Hmm, the plot thickens. Who knows, they may even have shared an elevator. Breathed the same air.

It might be difficult to find someone who has not heard of Stephen Fry. He's even on the cover of the Video Collectibles catalog where you can order an alarm clock with his mellifluous voice 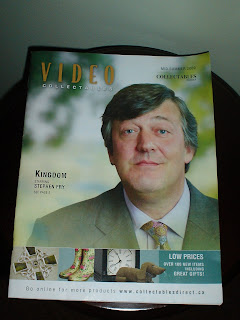 proffering choice phrases to bring you to consciousness. Or you could order the latest DVD of Kingdom in which he portrays the warm and sympathetic solicitor Peter Kingdom ever calming the waters of chaos around him. Yes, from Blackadder to A Little Fry and Laurie, to Jeeves and Wooster and much before and much after, Fry is quite simply a household name. Well, almost.

If his father had accepted a teaching job at Princeton, Stephen Fry says he could have ended up a Steve instead, hence his early fascination with the United States and his phantom American doppelganger.

Among the many photographs in the book, there is a two page spread of Stephen Fry driving with seemingly unbridled spirit--to borrow a phrase--his iconic London Taxi Cab across the South Dakota Badlands; I can't tell if both hands are on the wheel or whether he was ogling his iPhone for a compass reading, but a London taxi cab in the American wilderness is a lovely juxtaposition.

From the eastern-most point of Eastport Maine to the northern-most point of Barrow, Alaska, all the way to the southern and western-most point of the cooling lava fields of Kilauea in Hawaii, his sympathetic and understandably selective rambling across the vast continent is a delight. It includes the mystery of 'hoosier', the loquacity of Ted Turner, a castle in Kansas and a great deal more. It is a fun book which made me realise how very different and diverse the States truly are. A book which had me dreaming of a road trip myself, albeit one at the helm of one of those luxurious motor homes. (My relatives in California need not worry, the likelihood of such a trip is imminently unforeseeable.) Fry's eloquent wit and writing style is present and there is a genuine interest and fascination with Americans and the American way of life. On a number of occasions, he finds himself in a location where he imagines he could live and be content. This coffee-table sized book is well illustrated and includes additional gazetteer-like facts. A very good companion to the television series. I think.

2. Map Addict: a Tale of Obsession, Fudge & the Ordnance Survey by Mike Parker:

Like most youngsters, I spent a fair amount of time ensconced in an atlas, fascinated by exotic place names, geographical landmarks, and colourful land formations. As for maps, it would have been those taken from my father's collection of National Geographics, large scale maps for specific countries. But maps for directional use were never of interest to me for they were associated with being lost on family holidays with all the stress and angst that went with that scenario. Mike Parker, however, has been a devotee of maps from an early age and his persistent interest has made him somewhat of a specialist in this area.

Map Addict is a well-written and funny book. Parker incorporates memoir, travel narrative, and a basic historical overview of maps in the United Kingdom--specifically the Ordnance Survey Maps. From his early love of the children's books by Malcolm Saville which had maps more realistic than those found in Arthur Ransome, to his ever expanding collection of Ordnance Survey maps, we journey with Mike Parker and share his fascination with all things cartographic.

It is not a dry subject. There is much humour to be found. A requisite chapter all about odd place names and locales that have erotic references is both amusing and informative--chalk landscape figures are involved. There is a wonderfully amusing chapter about maps and religion and specifically interesting is the planned city of Milton Keynes, where Parker has a rather startling interview with a security guard. There is an interesting chapter concerning the power politics of positioning the Prime Meridian. A chapter devoted to the fascination of borders and boundaries such as Baarle in Belgium, and other places in Europe as well as the border problem of certain counties in England, like ones that led to the fate of Rutland. There is of course an excellent chapter on the Ordnance Survey maps, and a great deal more including the portions of travel narrative dealing with his European excursions, mainly his visit to Yugoslavia and Albania. I learned a great deal from this book and an enjoyable time was had.

Now, there is that reference to "Fudge" in his subtitle, and I remember happening across the word only once in the book, and yet, though I could have sworn I made a note of it, it is not to be found. When I checked the index, it was not listed as it might have been between "Fucking, Austria 243--44" and "Fylingdales radar station, Yorkshire 170" but I am pretty sure it was not in reference to an edible sweet.
Posted by ralph mackay at 11:45 pm