Two from the Porcupine's Quill 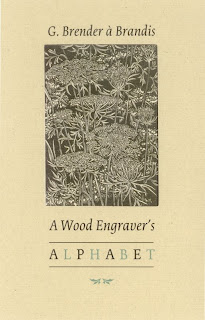 Prompted by Tim Inkster of Porcupine's Quill Press, Gerard Brender à Brandis, master engraver and print maker, has produced another wondrous book of wood-cut engravings, a flower for each letter of the alphabet.
The engravings are so rich, so densely cut, that looking closely at the engravings one feels drawn into the pictures as if entering a forest, a forest of detail. Coming to the Foxglove, I felt as if I had entered a clearing and there stood the flower, totemic in its beauty.
In his introduction, the artist reveals something of the process of engraving--conceptions and methods--much like he so affably does when one visits his "Artist At Work" open gallery and workshop in Stratford, Ontario, during the Shakespeare Theatre season.
Although a book of silent images, he reminds us of how flowers were used as messengers of unspoken meanings, and so the alphabet, the text--sub rosa-- can be woven within these images for each of us, with our own associations.
A volume to sit alongside the other finely produced books of this artist issued by the Porcupine's Quill, and a book, by all means, for the gardener's or horticulturist's collection. An ideal gift in fact. 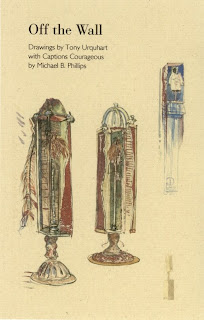 Off the Wall drawings by Tony Urquhart with Captions Courageous by Michael B. Phillips (Porcupine's Quill Press, 2008).
Though admittedly not thoroughly familiar with the work of this artist--only vaguely so in the shadows of my knowledge--I found this most unusual book to be most entertainingly amusing. I was surprised in a most pleasant way for I had approached this volume in all seriousness, thinking I should first look closely at all of Urquhart's images before embarking upon the textual commentary by Michael B. Phillips, realising that I may be entering the rather dubious territory of tertiary discourse: the artist's work, the associate's commentary on that work, and then my observations of the work and reactions to the commentaries, a rather dour academic endeavour fit for the post-graduate in art history. . . .
I guess I should have clued in to the title: "Off the Wall" and "Captions Courageous."
The commentaries, or rightly so, 'captions', are as imaginative, absurd, humourous and surreal as some of the drawings, prints and sculptures that grace the pages of this finely produced volume.
My initial observations evoked images of pedestalled personal altars, cosmological or climatological devices, strange reliquaries, bizarre, surreal--à la Remedios Varo--objects with organic links between the terrestrial and the cosmological space-time continuum. . . So how refreshing to come across Phillips's courageous captions such as this one on page 52:
A box inspired by the Spanish puppeteer Senor Sergiao Wenches, a frequent guest on the Ed Sullivan Show. Any resemblance of the head-like object within the box to a former Prime Minister of Canada, or to Ed Sullivan himself, is probably a coincidence.
The image itself is listed in the index as: A forgotten trip. Pen & ink, white gouache, 1977-1983. 14.8cm x 11.4 cm.

I am in awe of their dual imaginations seemingly open to all wave lengths. A very interesting book.