K is for Kafka--who else could it be? 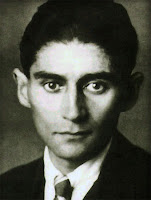 If asked by a professional in the area of psychology what would first come to mind when shown the letter "K" on a flash card, mine would be an immediate response--and a telling one: Kafka.
Who else could it be?
If asked for other choices, there would be contenders. Kierkegaard is in the shadows, neither in, nor out. Kleist with a ghost-like whisper, is a possibility if pressed. Keats even. But all are in the shadows, so to speak, of Franz Kafka and his Josef K., whose very existence and literary work inhabit the letter, indelibly--at least for me.
I realise it reflects my culture, my judeo-christian background, my literary interests, my education--my alphabet. For others, the letter, or its equivalent, would have a kaleidoscopic variety of responses, from Kiev to K-Mart, from Kilt to Kangaroo, from Kalamazoo to Kathmandu, from Kandahar to Kuala lumpur, from Kawabata to Kurosawa, from Kinshasa to Kansas, from Koontz to King. . . . Other perceptions, other preoccupations, other permutations, other possibilities of this world's rich variety.
Posted by ralph mackay at 3:20 pm