H is for Hullabaloo, or, Out on a Limb 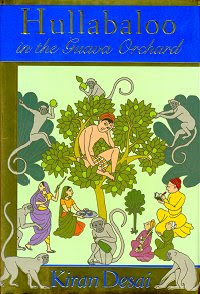 Hullabaloo. Even if the precise meaning of the word is unknown, hullabaloo is one of those words whose sight and sound seems to evoke its very meaning. For me it has a light overtone, memories from childhood birthday parties, with musical chairs, and those rude, gleeful party horns that unfurl with a small faux-feather, in blue or pink, dangling on the end, ideal to tickle another's ear.
The etymology seems to be a native Scots/English derivation, but Indian English is also important: "The term 'Hullabol' is still used in Indian English to describe a type of public demonstration, involving making a great noise."
I have owned Kiran Desai Hullabaloo in the Guava Orchard
since its printing in 1998, and like many books I own, it has been shelved and half-forgotten. It was to this novel I turned in preparation for reading her Booker Prize winning novel, The Inheritance of Loss. The titles seem at opposite spectrums of seriousness. So desperate, in fact, that I half questioned myself as to the authorial connection. The title of her first novel is like the self-conscious smile of a brilliant mind, a smile that pokes fun and yet is heartfelt. The title of her prize-winning second novel hints that she has shed the youthful satire and moved on to serious affairs, exchanging the trampoline for the hammock. For it is a trampoline of a novel with moments of farce, great hilarity and satire. The middle-class Narayanesque world satirized with a soupcon of Rushdie and a touch of allegory.
Hullabaloo in the Guava Orchard is a title that in five words hints at the rich use of language, plot and setting. A title which gives the reader a sense of what to expect much like such titles as The Hitchhikers Guide to the Galaxy, Fear and Loathing in Las Vegas, Do Androids Dream of Electric Sheep, or Through the Looking Glass, and What Alice Found There to name a few. Titles quite different from the poetic, symbolic, or conceptual like The Rings of Saturn, or Elementary Particles to name only two.
The story opens with the birth of Sampath Chawla, auspiciously born on the day the Monsoon rains finally arrived in the northern town of Shahkot after the hottest of summers, and at the very moment that a Swedish Red Cross relief crate crashes into the family's front yard tree. The second chapter shifts twenty years into the future and from here the plot follows a straight line to the finish. Sampath has turned out to be a rather reluctant partaker of life, and a failure at many a job; fed up with his latest position at the post office, he wanders off one day and finds himself in an orchard, and is possessed with the desire to climb a guava tree to escape. To escape it all. Gradually the cast of characters are introduced episodically as they react to Sampath's search for stillness and calm, a cast which includes a machination of monkeys with a taste for liquor, a spy for the BUFHM, Branch to Uncover Fraudulent Holy Men, various administrative types, and other town folk and of course his own family. There is a brief attempt to entice his son back to normality with the concept of marriage as a cure, but after Sampath has impressed the townsfolk with pronouncements from on high (personal insights into their lives due to his having passed the time as a postal employee reading their mail), Mr. Chawla has an epiphany that his son as holy man could make the family's fortune and raise them out of their middle-class life. He proceeds to reap the economic benefits while the farce unfolds. The minor subplot of Sampath's aggressive sister Pinky's pursuit of a suitor, Holy Hop, a lowly ice-cream vendor, is quite hilarious. There is a scene where there is a reversal of roles, Pinky as Romeo to Holy Hop's Juliet as he showers her with bathing implements from his bathroom on high.
This is a gentle satire of a society's superstitions, religious and social positions, the remnants of colonialism, and of human nature in general. The fanciful ending as the Baba of Shakhot, with all his cryptic and whimsical adages ("many a pickle makes a mickle") is spirited away to the ever present and looming mountains further north, symbolic of the mystic union of spirit and nature, is one that evokes fairy stories and folk fables. However, the spy for the Branch to Uncover Fraudulent Holy Men, gets his just desserts as he plummets from his hiding place in the tree down to his watery destiny. I somehow think that the author particularly enjoyed this character's end.
Allegory? Satire? Whatever it is, it is a an enjoyable read which lifted me out of the wintery doldrums of a Canadian winter and left me impressed with her sense of craft, style and humour and made me look forward to her Booker Prize winning second novel, The Inheritance of Loss.
Posted by ralph mackay at 1:22 am

haha,thanks. I read this book a few years ago - was nice to remember it again. I had some of her mother's (Anita Desai)stuff in school, Games at Twilight and some short story I can't remember the name of. And I think I had started on Baumgartner's Bombay.. don't know where that went.