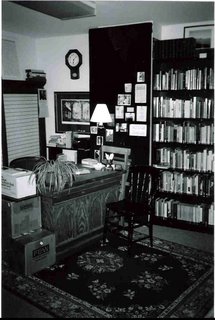 Dust motes and bare shelves, tired thoughts and diminshed energies; hard to think I shall close the door and never return. Today, after almost a week of packing and moving boxes of books, my resolve and my ability to rise to the required challenge were at their lowest ebb. It was at the close of day, the light fading into a steel november dusk, that I came across an old audio cassette which had fallen behind a cabinet. An audio cassette I had taped of an interview with Joseph Campbell in 1981. On the other side I had taped the countertenor Alfred Deller singing John Dowland's songs with Robert Spencer, lute, and the Consort of Six. Holding this old "Intermagnetics" 60 minute audio cassette, was like finding a lost thread of light directing me out of the of the bibliographic labyrinth I had entered three years ago. I sat on the weathered oriental carpet and my thoughts travelled back to conversations on philosophy, literature, art and music with a friend in the cafes of Montreal on la rue St. Denis and boulevard St. Laurent. The friend who lent me his old slightly scratchy album of Alfred Deller singing Dowland, and the one who told me of Joseph Campbells work. The days of haunting secondhand bookshops for Kierkegaard, Donne, Conrad or Durrell; and record shops in search of those Angel Records of Freni, Baker, or Schwarzkopf, or Blue Note Records of Miles Davis and other giants, or those ECM albums which were so in vogue...

At home, I showed my wife the cassette and we listened to it together. It was a pleasure to be able to share a part of my life of 25 years ago, but saddening, for the world seems to be running further away from the philosophical truths Campbell believed in.

At the beginning of the day, however, I turned on CBC radio as I usually do when I enter the shop, and the classical request show Here's to You with Shelley Solmes . She was introducing a piece of music requested by someone who said he had had a dream of listening to this piece of music with a friend, and so would like to hear it on the show. It was the villanesca by Granados from his Danzas Espanolas. Angela Hewitt on the piano. That alone was interesting. A dream of listening to a specific piece of music. With someone. Unusual. But what had me transfigured into a statue of apprehension was that the piece of music was important to me as well. In fact, last night I had rumaged through some old video-cassettes and discovered a film I had taped off the television, one of my favorite French films of the 80s, Peril en la Demeure(1985) with Richard Bohringer one of my favorite actors who also appears in Diva, another favorite film of the 80s. This piece of music by Granados traces a thematic thread through the film. I watched the movie and was reliving that late 1980s and early 1990s period of my life.

Coming to the end of one pursuit I seem to have been shown the past, as if the recent three year section of my life had just shifted into puzzle position, interlocked with past events to reveal a larger picture. A final piece for the middle panel of the triptych of my life. This makes me think of Bohringer again, playing an interesting character in the film Diva, working on a very large puzzle, listening to ambient music and finding that last piece.