A Macclesfield Mayor, a mysterious painting, and my love of books and art. 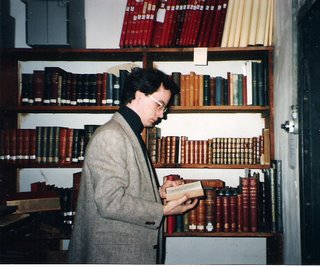 Recovering the past is to walk the labyrinth of inner thoughts. One hopes to find sources of meaning on the way in, and one hopes to discover sources of strength on the way out. My devotion to books has brought me great pleasures and much delight, but it is a devotion which comes with a literal weight. As I contemplate moving a bookshop, a small one though it is, I find myself overwhelmed with the thought of it. When I close my eyes I may be avoiding the task at hand, but I am really treading the maze-like path towards a recollection of the past in my search for the source of my love of books. And hopefully a source of strength on the way back.

The initial influence would be my Great Uncle, who inscribed his book gifts to us as "Uncle Ivan." He was my Mother's uncle who lived in the city of his birth, Macclesfield, England. My grandfather, Francis Herbert, was the only sibling of five brothers to emigrate. He, like his brother Ivan, was a talented amateur painter, and this was one of their common interests. The other, I believe, was to surround themselves with a few nice books. Some of my grandfather's books have passed down to me. Nothing truly old, rare or valuable, but valuable to me for their association and for his name inscribed on the occasional endpaper. These books would be the second influence. They used to reside on the top-most shelves of my parents bookcase, out of reach, thankfully, of a child's crayon world, abiding their time, silently awaiting the day when they could reveal their hidden magic. I remember standing on a chair, breathing in the heady odours released as I fanned their pages. I sometimes think that this is what hooked me on books. Their aesthetic, tactile and odiferous qualities. Ideas came later. Breathing an old book's scent can bring me back in time much like Proust's madeleine or the uneven paving stone. It can be ambrosial in nature. A relaxant for the mind. The third influence would be from an older cousin on my father's side of the family who gave us wonderful books for christmas presents. A set of four Joseph Conrad novels set me off on a life-long enjoyment of his works.

These influences reinforced each other to guide me along as a nacent book-fancier. Never having the money to buy from catalogues and such, I turned into a bookscout for my own desires. Church sales, garage sales, public library sales, and academic institute and university library sales were common sources. Invariably it meant lining up for long periods of time, often in inclement weather as most sales took place in the fall and the spring. These entailed competition and sweaty scrums. More enjoyable by far was browsing calmly in secondhand bookshops, each with their own charm, quality and selection. Some have long gone, buildings swept away for large plazas and downtown hotels, while others continue to thrive. I think how pleasant it would be to revisit my favorite Montreal bookshops. All booklovers have their stories and memories of bookshops and proprietors. Maybe some will even remember old Chumley & Pepys.

Books have led me on to work in a library and to pursue a library degree, which led me to the challenge of working on the archives of an old institute, and to the pleasure of cataloguing old books. The photo above captures me in my element, looking a bit younger and fresher, in the institute archives in 1992, perusing a volume of Montaigne's Essays. Probably his essai "On Books." I can see why Paul Theroux would like to carry a penguin paperback of Montaigne's Essays with him on his travels. It would be a good general companion.

These are my fancies, in which I make no attempt to convey information about things, only about myself. -Montaigne

What of the "Mayor" and the "mysterious painting?" Well, as I have said elsewhere, life rarely flows in a straight line, and so here too, in my meditation on my love of books, I recalled a story of my uncle Ivan. In his later years, before I was born, he finally paid a visit to Canada to see his brother Francis. Ivan was at the time the Mayor of Macclesfield, and so he brought one of his own paintings to present to the Mayor of Montreal, Camillien Houde. Houde had a checkered career but during the the 1939 Royal Visit, he seemed to have charmed the Queen and Prince Philip. At an official dinner, he sat beside the Royals and was reading a list. When asked what he was reading, he told Prince Philip that it was a list of subjects he was not to bring up and discuss with them. He passed the list to the Prince who responded with robust laughter. Nothing like honesty to break the ice. Supposedly the Queen thought him the most interesting of Mayors and said so when back in England. Perhaps this is what prompted my great uncle's gift. Good publicity. The fact is I have always wondered what became of this painting. Does it still reside somewhere in Montreal's City Hall? Was it stored away and later sold? Or did it stay with the Mayor's family? Perhaps there is a descendent of Mayor Houde who inherited this painting, and she or he is standing in front of it as this moment, whatever moment that is, wondering who the painter was and how it came to be in the family. This unresolved story is like one of the those distant pathways leading off into a misty valley. A pathway I have been meaning to follow. Perhaps when I revisit my favorite bookshops in Montreal, I could try to solve this question, and by solving it, discover another story to tell.

And what of the possible sources of strength to help me face the task at hand? Well, having traced my love of books to relatives, I must pause and think of their stories. A classic story of immigration, struggle and success; sons and brothers fighting in the second world war, persistence and hard work . . . . Moving a little bookshop is really nothing in comparison. So when I find myself bemoaning my sore back, I shall just think of my forebears and all they have strived for over the last century. That should give me perspective. And strength for that last box of books.